As many locals know, Dartmoor Walks are easy to find and full of hidden gems from ancient ruins to abandoned mines. If you explore the history of Dartmoor you will find that it was once an industrial playground, all sorts of resources were taken from this harsh landscape. The Dartmoor railway fed over the moors allowing transportation of all these resources and if you explore Dartmoor the likelihood is that you will come across some industrial locations from times gone by. Dartmoor is an amazing idea for hiking holidays or group walking, even solo walking is something you see people doing regularly in Dartmoor national park.

One of the most amazing places and frankly quite odd locations on the moors is the Red Lake. The name may conjure up thoughts of blood red waters surrounded by baron landscapes and to an effect you would be right. I decided to explore the Red Lake and take a trip across the moors to find it, adventure awaits.

So, as I live near Buckfastleigh on the edge of Dartmoor I new the perfect location to start my walk, and the general route I would take. If you were wanting to take the common route to the Red Lake, then it would probably be best to start in Ivybridge and follow the old Dartmoor railway track.

I began my walk at Ludgate and ascended high onto the peaks of Pupers Hill, it was clear from this point the landscape was changing. I could see the whole of Buckfastleigh and surrounding villages, just to experience this view was very special. 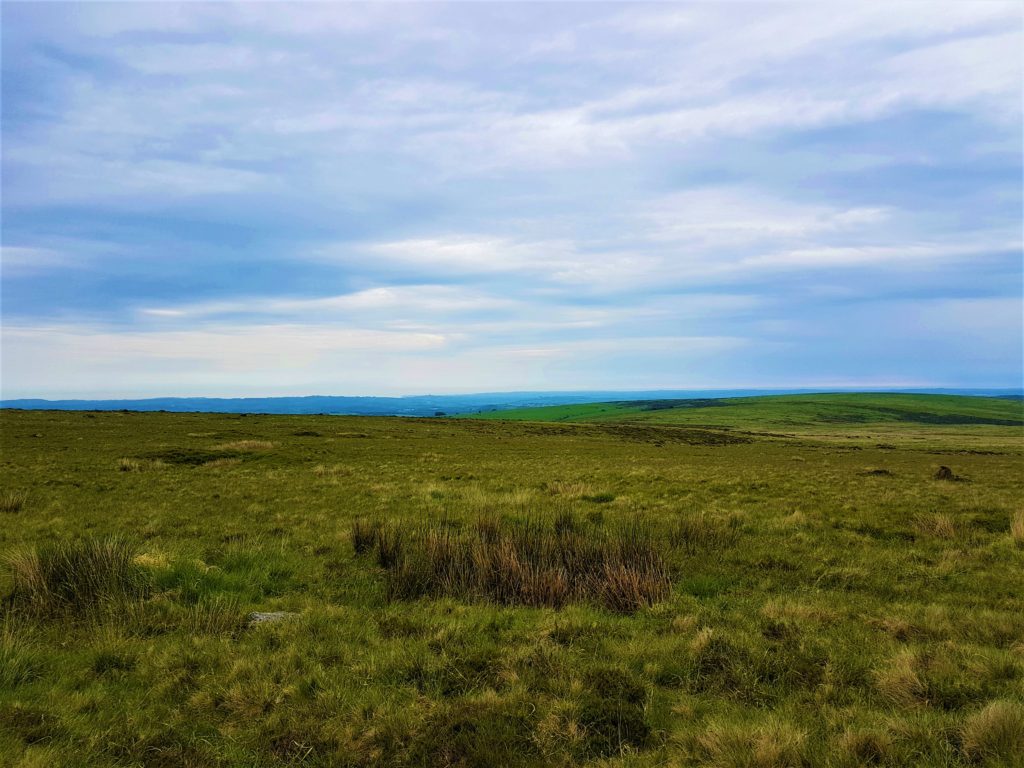 The paths at this point on the journey are quite visible, however approach with caution as its easy to be misled as channels through the grass begin to appear in different directions. Coming down Pupers Hill the ruins of Huntingdon Warren Farm appear in the distance. This Farm was established in 1802 by Thomas Mitchelmore and was used to breed rabbits to provide the local communities with food. The area has been lived in for centuries and has had numerous settlements built on and around it, including Bronze Age huts. 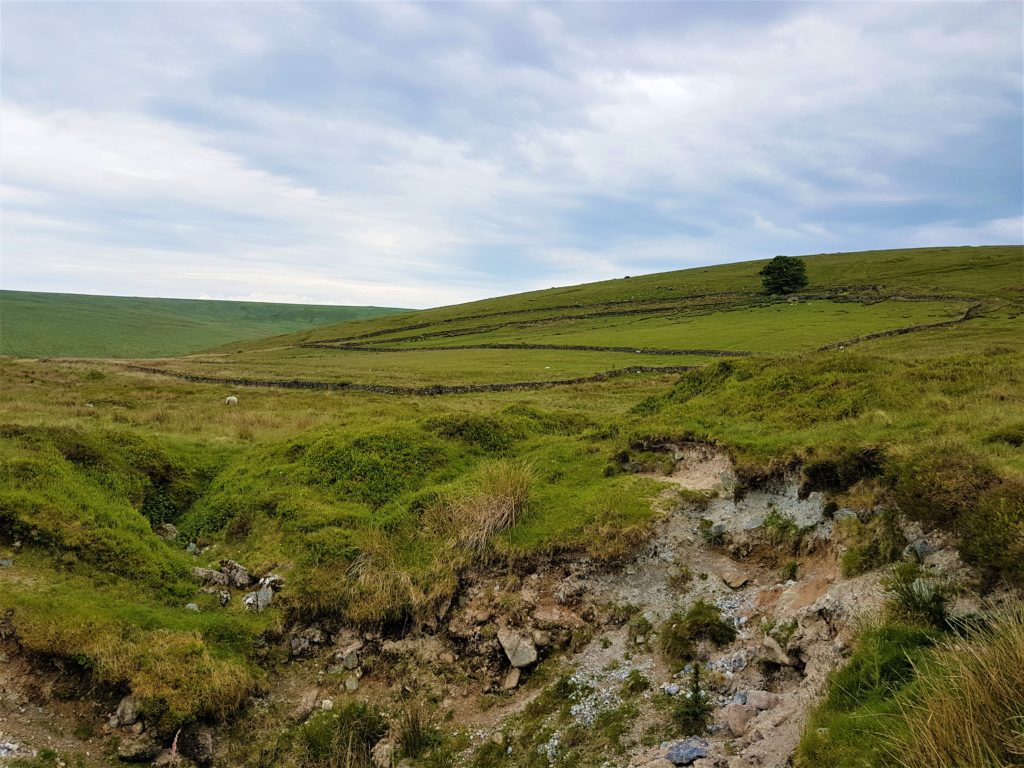 As you get closer to the ruined buildings a stream appears and plenty of sheep start to turn their heads. The sheep shouldn’t bother you but approach with caution, if they have lambs they can be a bit defensive. This is where Dartmoor becomes wild, you start to realise how far you are away from any sort of life. Continue straight ahead up the hill past Huntingdon Warren Farm, there are paths leading up the hill they are just difficult to see when attempting the climb. The hill is steep but once you reach the top you will appreciate the vast surroundings your able to see.

Huntingdon Warren hill is one of the steeper hills on this route and is eclipsed at the very top by an unusual pile of stones. These stone piles called Cairns are situated all over Dartmoor and Archaeologists have a few theories as to what they are. The two main theories are firstly that they were used as navigational aids in years gone by to mark routes across the moors. The other theory is that they were a memorial to those warriors that died during tribal battles and each stone represents one life. Modern Cairns can still be found dotted around the moors and are used as navigational aids by walkers, it has been advised that walkers do not continue to leave stones in piles as it distracts from the original history and becomes confusing when navigating in bad weather. 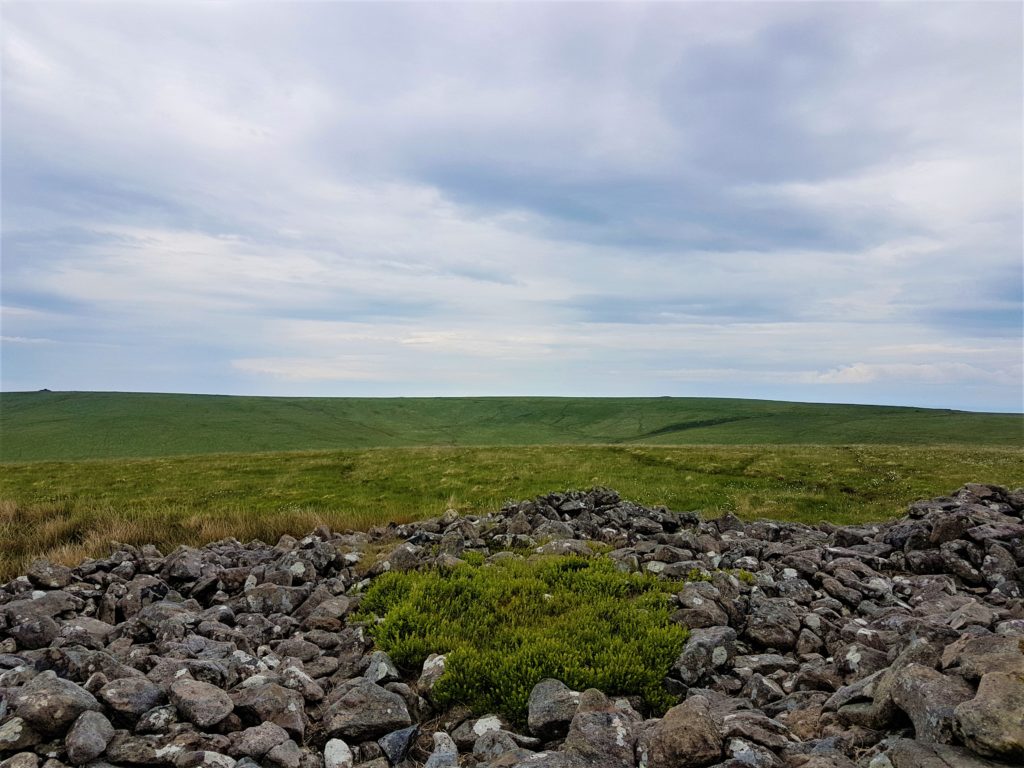 From this point its another trip downhill from the peak of Huntingdon Warren. Another stream appears at the bottom of this hill, it is in fact the River Avon, which may not look like it sounds however it is only a short distance from its source and hasn’t built up yet. The river has some rocks allowing you to climb over it or you could just walk through it if you have your wellies.

The final stretch of this walk is up hill at first but then goes quite flat, the volcano like feature which towers above Red Lake shows its head on the horizon. It can be very strange to see a pointy hill in the middle of nowhere, considering how flat it is in comparison to the surroundings, either way it is quite obvious what direction to take. 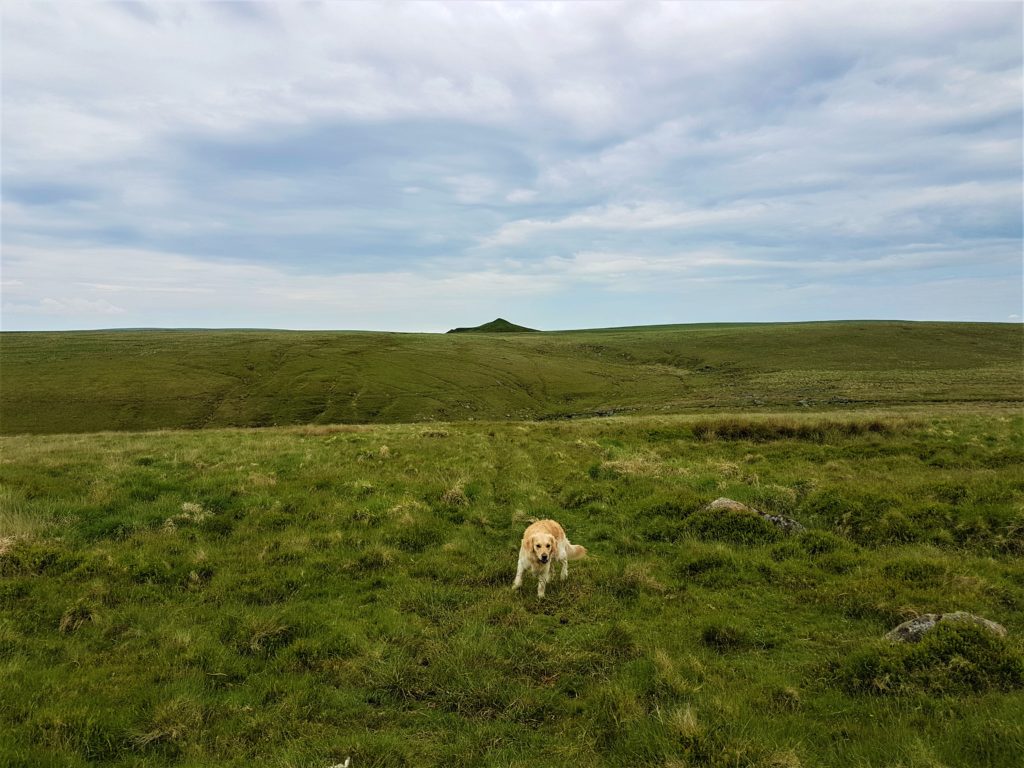 Once you arrive at the Red Lake you can notice two of the smaller lakes first and then as you cross the causeway between these two pools the larger lake appears. I decided to climb to the top of the volcano and have some lunch as it had been quite a walk, around an hour and a half to be precise. The views from the top were spectacular, not just because the volcano was high up but because the landscape around Red Lake is incredibly remote, just moorland for miles. There was a family and an older couple also exploring the lake, which shows that its possible for most active people to accomplish this walk, I imagine they came along the old Dartmoor Railway path being the longer but easier route. 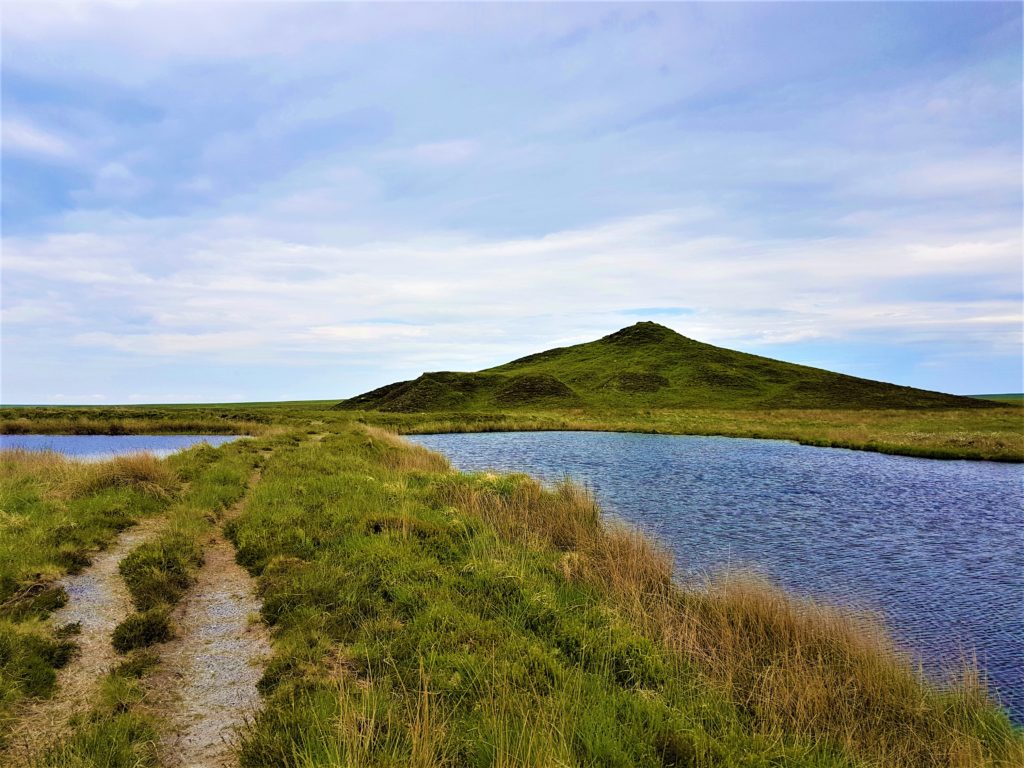 I continued to explore the area around the Red Lake taking in some of the old historic ruins that were once an industrial machine. What I imagine was the old platform sits at the beginning of the railway line in a pile of old blocks. Other concrete surfaces sit where there once were buildings resting on them and an old fireplace still stands giving those that visit a reminder of the harsh conditions these workers must have experienced. 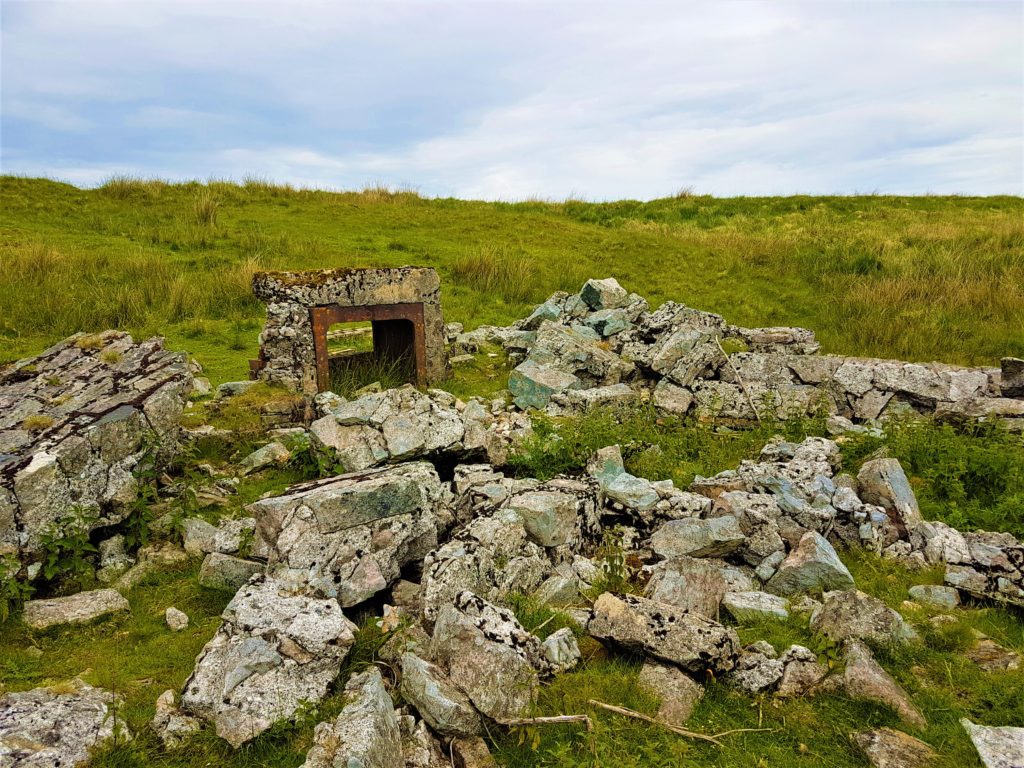 After Cooper and I enjoyed the water, Cooper being a dog was the one who seemed to enjoy it the most, I decided to head back home. Instead of taking the route I used to get to the Red Lake, I decided to try going a different way, still wanting to arrive back at Ludgate. The route I took back to Buckfastleigh is known as the Abbots Way Dartmoor. I made my way down the old Dartmoor Railway track which is now a steep walled and fairly flat pathway. You get that historic feeling as you walk down this historic railway line, imagining how important it must have been for transporting both China Clay and workers. 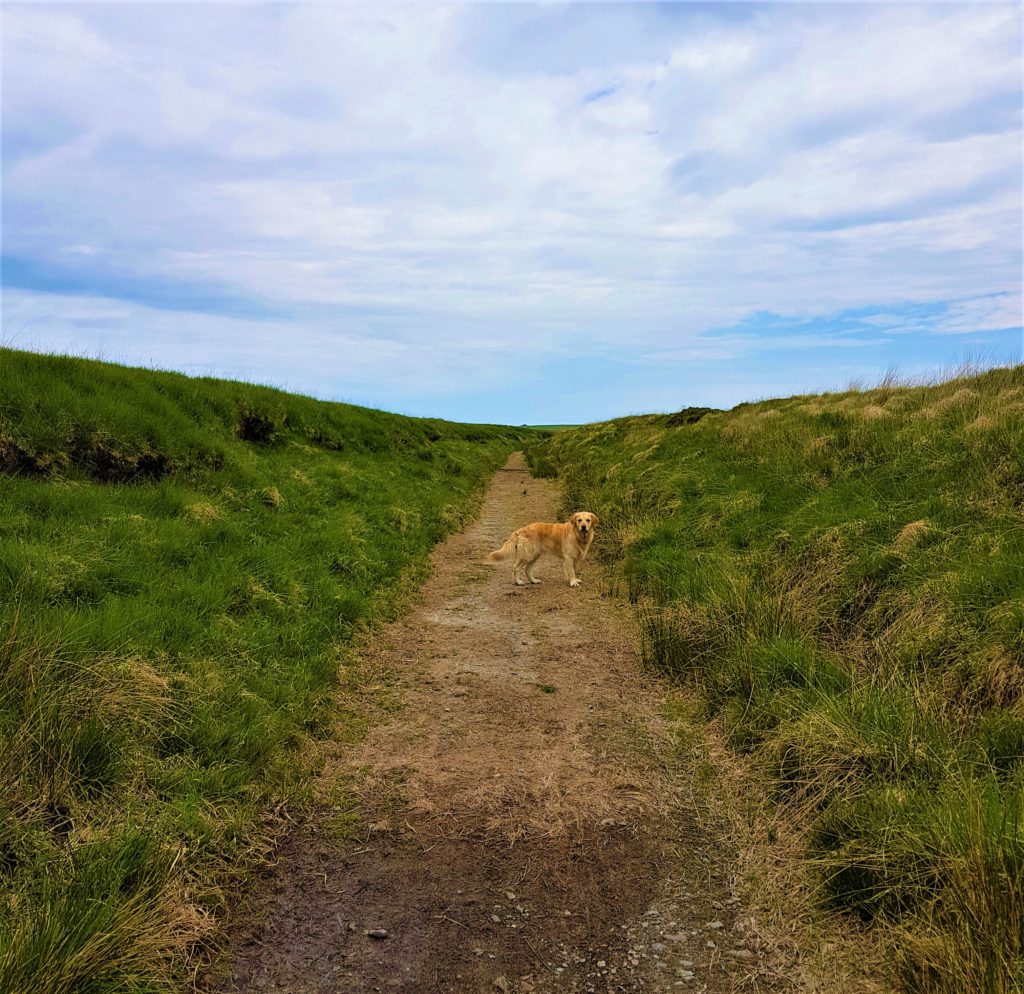 I checked the ordnance survey map and found a pathway that led all the way back to Ludgate, there are a few interesting locations near this path but if you explore remember to go back and take the correct route, this is not what I did. If you need an Ordnance Survey Map you can purchase them from the Ordnance Survey Website the one i used was the Dartmoor Explorer. Feeling confident I decided to take another path nearby to Peters Cross which is situated on another Cairn as you follow the path coming off the Railway Track. Luckily for me it was a nice day and fairly, dry as I ended up trenching through some rather boggy areas. After an exhausting experience, which the dog certainly enjoyed I found the original path I was supposed to take. 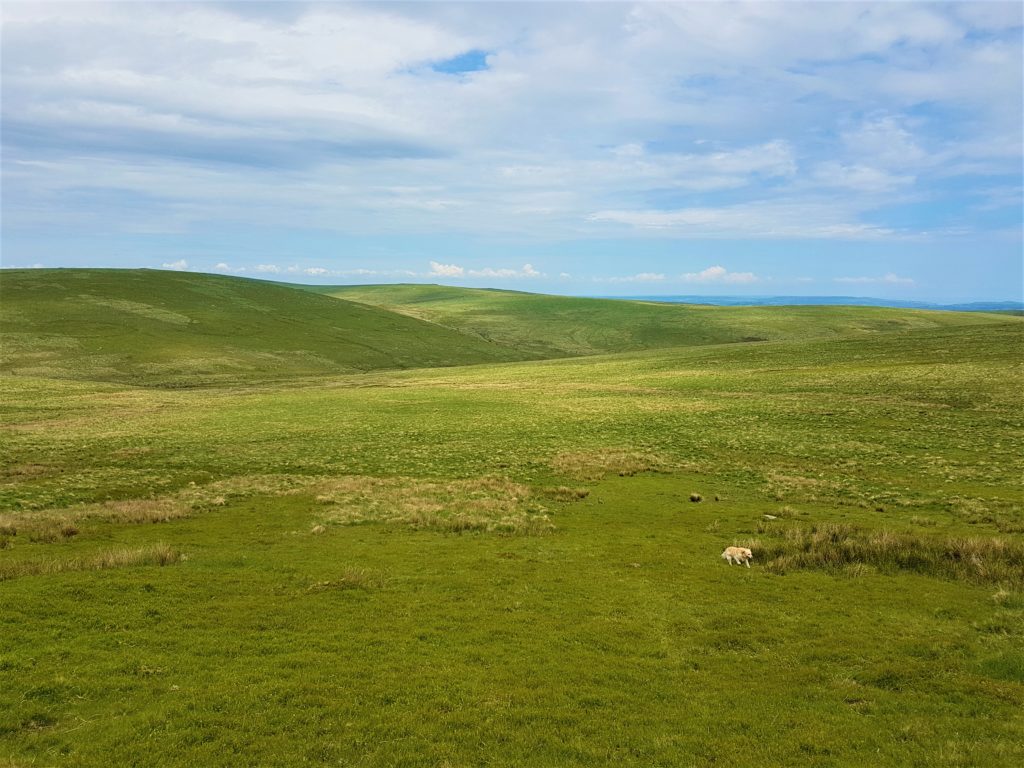 The path I was now on will lead you all the way down the river Avon, another beautiful stop for a picnic or break. Clapper bridge is located just up from here and if you follow this route according to the map its very easy to recognise. The bridge itself may appear rather primitive but trust me these are heavy Dartmoor stones and won’t budge. I continued alongside the river Avon following the Abbots Way which was originally used my Monks to travel from Tavistock Abbey to Buckfast Abbey, I believe the religious stone crosses such as Peters Cross are located along the majority of the routes the monks took. Another cross can be seen during the walk along the river Avon and is aptly named Huntingdon Cross being located directly at the foot of Huntingdon warren hill. I stopped for a short break as the sun had come out and it was becoming very hot, dipping my feet in the stream felt particular refreshing. 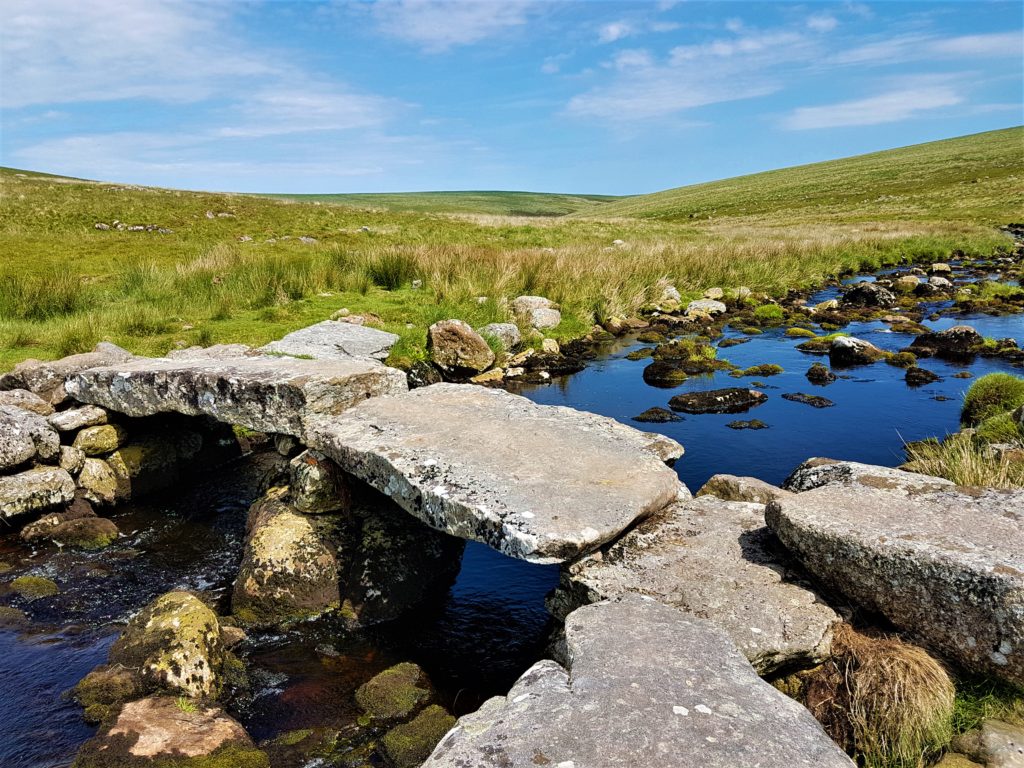 After climbing over a stile and continuing along the river I realised I had gone too far, I think it must have been the beautiful surroundings. I walked back around 10 yards and started to climb a path up to the top of Pupers Hill, suddenly starting to recognise my surroundings I knew I was close.

A small image of Buckfast Abbey appeared in the distance and I gently strolled down the hill towards Ludgate feeling positive about all that I had seen on the moors. Living close to Dartmoor is a wonderful thing and the amount of history means that there is always still so much to see. I plan on walking the Dartmoor Railway line from Ivybridge to the Red lake so keep an eye out for that post.

I hope you have enjoyed reading about this fantastic Dartmoor walk and it has given you some tips on where to go and how to get there.

This article contains affiliate links. This means if you click the link and purchase the product then I receive a small commission, from that company. I only recommend products that I would use myself.