Coming from Devon it can be said that we are fairly familiar with the sea, however neither of us had ever driven a speedboat before. Hopefully this post will give you some insight into hiring a speedboat in Corfu, although its safe to say the process will be similar most places abroad.

To start off we asked the hotel if they could recommend any speedboat hire places, they of course recommended the closest to us a small place based on the beach in Agni. The hotel offered to organise the boat hire for us, this included pickup from our hotel from the jetty. 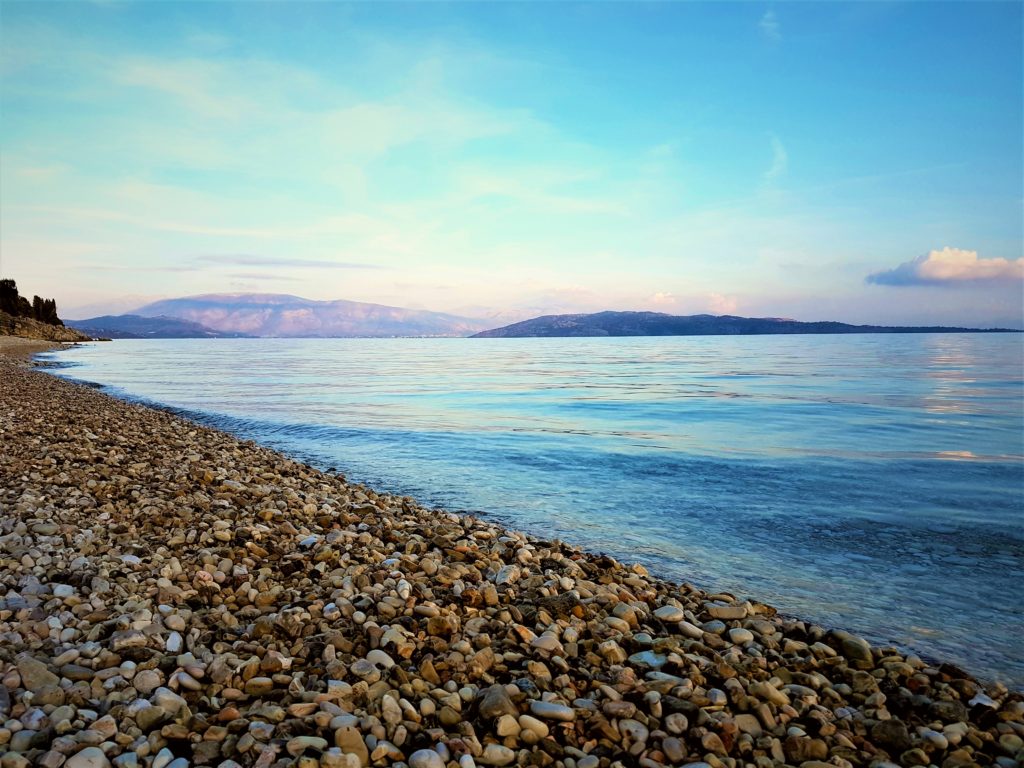 We decided to go for the lowest price option… no not because we are tight but because we didn’t want to spend too much on something we had never tried, lets face face it we knew nothing about hiring a speedboat in Corfu. The cost for hire was 80 Euros plus any fuel we use which seems reasonable. I checked online and this was the price on the website so no hidden extras by the hotel, great!

We booked the hire for Wednesday which gave sunny skies on the forecast, although I didn’t check the wind which I advise you do before booking. Try go for a day with no wind or the least amount you can, it makes exploring a lot less stressful.

With all things looking good we decided to head down to the jetty to meet our boat pickup person, sure enough he was there with the boat we were having for the day. We put all our stuff in the boat and headed on around to Agni beach to sign the paperwork, this is exactly the same as a rental agreement. 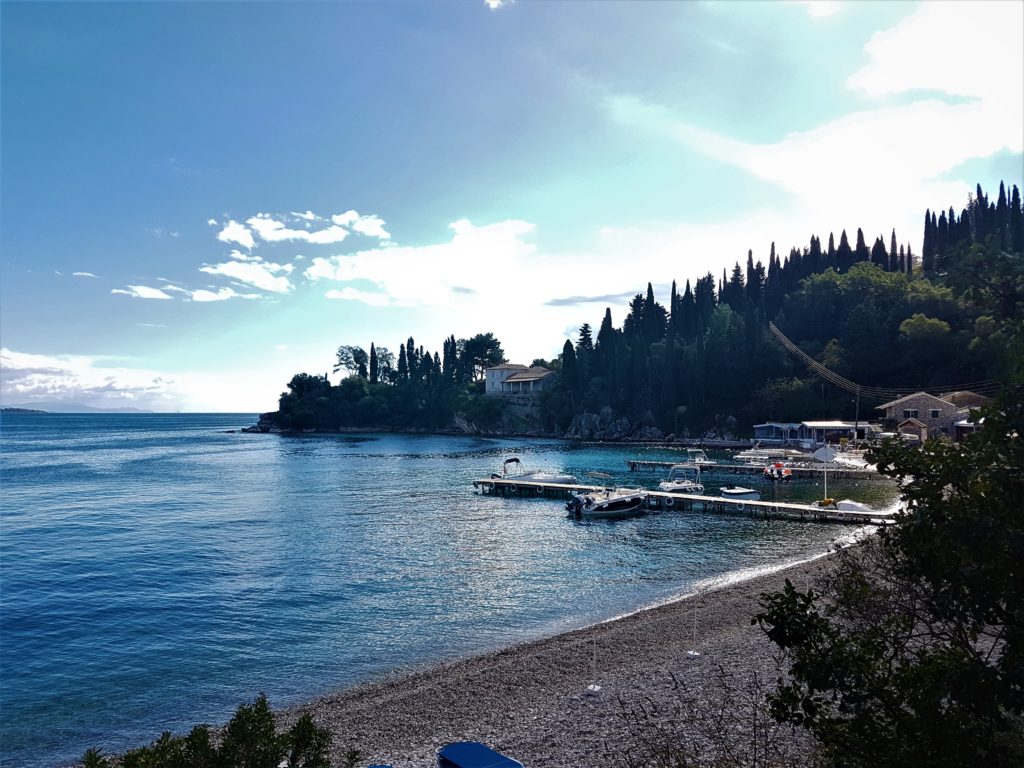 After all the paperwork was signed we were shown around the boat how to drive it which is fairly simple. The throttle is a lever and the steering is the same as a car so you get the hang of it pretty quickly. An important thing to note is the documentation for the boat and your rental agreement should be shown to the port authorities if you are stopped, you have nothing to worry about as the process is straightforward. If you decide to dock at a jetty along the way you must use the Taverna it belongs to, this is the rule as they will help you in so it unfair if you decide to go somewhere else.

Everything was set we were off and we had the boat until 6pm so plenty of time to explore the coast. We decided not to go snorkelling straight away as it was still early and it might be nice to have the sea temperature slightly higher. We made our way round to the next bay Kalami where the Durrell’s house is situated. Having seen the house from the shore, it was great to see it from the boat, this cove is bigger than most of them so plenty of room to drop anchor and relax. 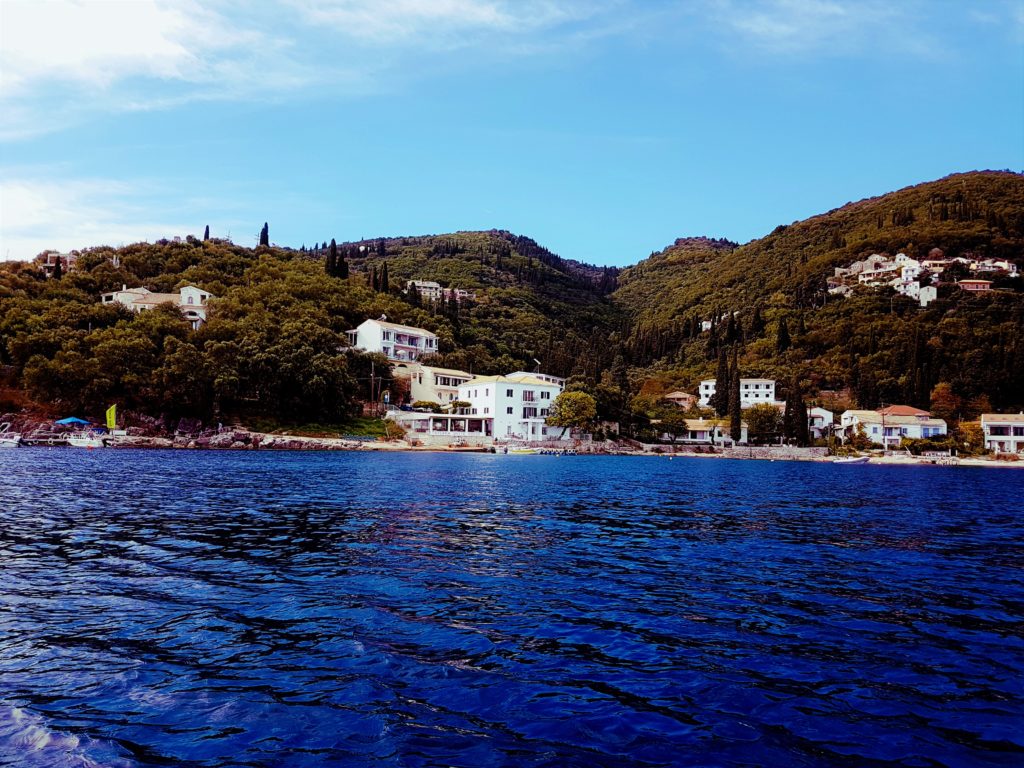 After a short while we left Kalami to venture further along the coast, eyeing up a clear run we went full throttle and being on the open water at speed has a great sense of freedom. We had a 30hp engine which is not the most powerful available but was certainly plenty powerful enough for first timers. Skimming along the water like a pebble we turned into Karasia, this bay is much bigger than some of the others and as we approached the shore we could see two big sailing yachts. We decided to stop here for a bit as it was nice and quiet with some shelter from the wind, the sun was now shining brightly as it approached mid-day. 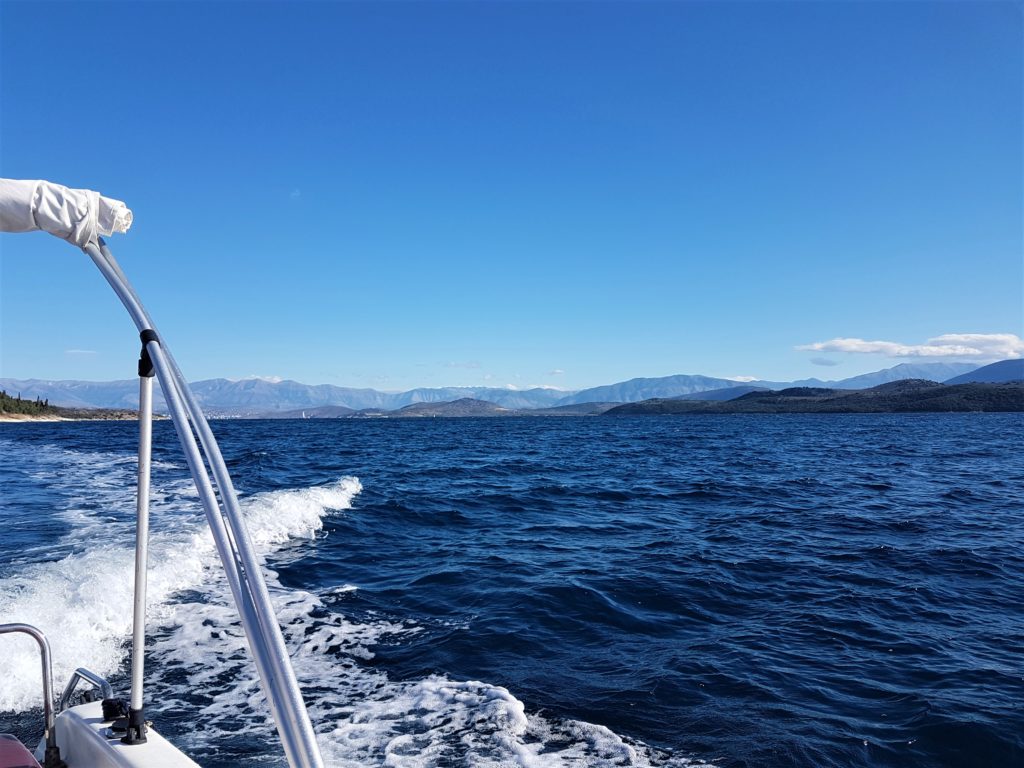 After our time in Karasia we decided to head back down the coast past our hotel towards Pantokrator which is the tallest mountain on the island. We stopped just before Barbati beach as the water was clear and some other boats were anchored of the shore swimming around. Naturally I jumped out and had a snorkel around the rocks not much over this way but the water was refreshing as it was getting hot. After a short while I jumped back into the boat and we both relaxed with some lunch we had brought on board. This was a great place to anchor down as the views of the mountain were spectacular and the area was not crowded. 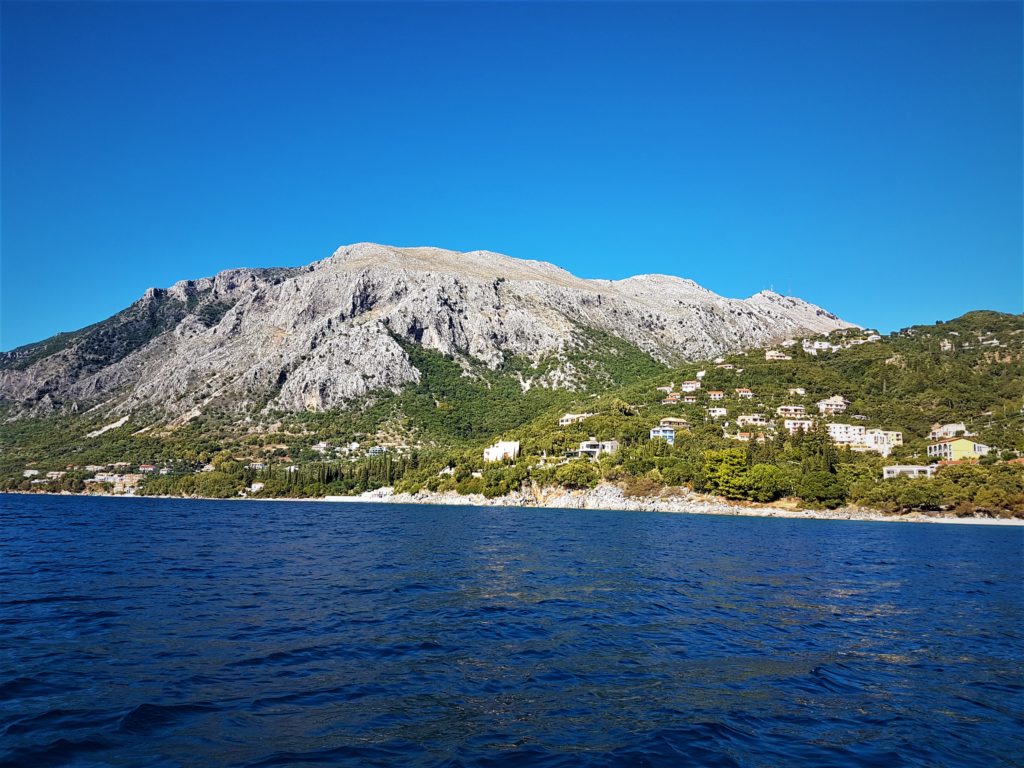 Having enjoyed some lunch with a view we headed back up the coast to a little cove we had visited on foot. This cove is well known as it has a small chapel hidden on the cliff edge, the chapel itself has appeared in a few stories including many regarding the Durrell family, Lawrence and his wife Nancy considered it their own private bathing pool. Lawrence Durrell was not wrong when he described the coves crystal blue waters, I had to jump right in. I got my snorkel on and dived under, so many fish appeared before my eyes, this area was much more inhabitable just by the amount of life under the water. I had heard about an underwater sea cave somewhere in the rocks so I swam over to the cliffs edge searching for the cave. It became quite obvious when I got closer, the water turned darker as I timidly made my way into the cave. You can swim all the way through and out the other side although this may be for the more adventurous, I wasn’t entirely sure where I was standing and not wanting to be caught out by an unfortunately placed sea urchin I decided to leave it at that. I swam around looking at all the fish, it’s a great sight and so is the underwater landscape so rocky with fallen boulders laying still on the sea bed. 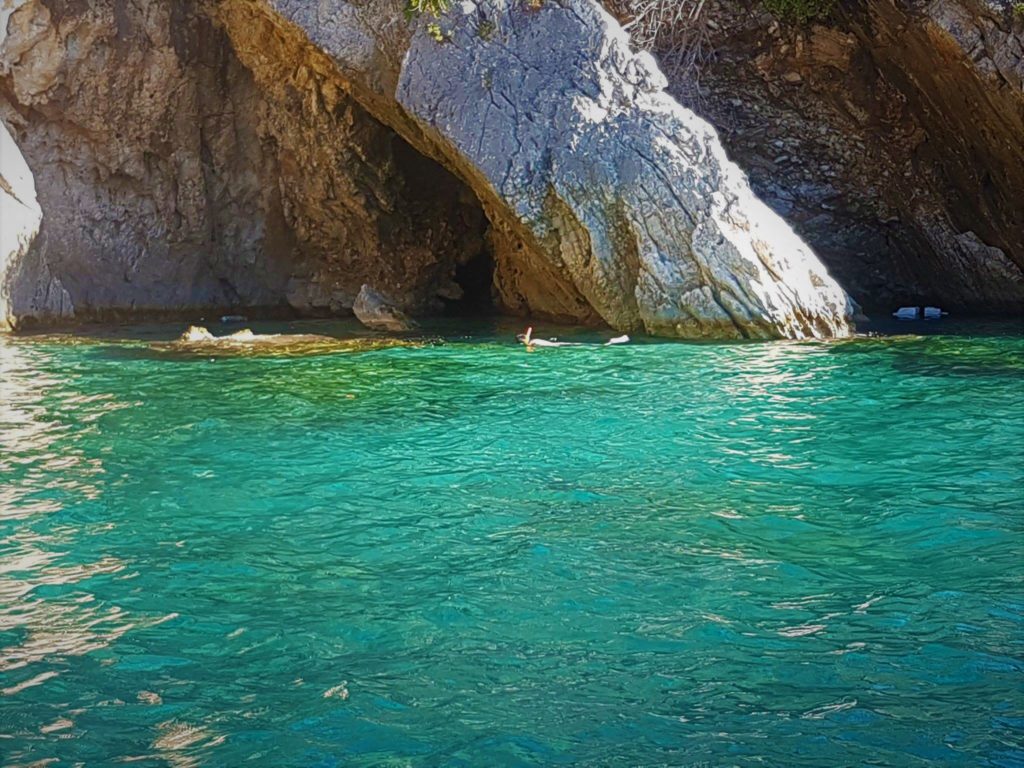 The sea was calm and the sun was blazing making it feel like August, forgetting that it was actually the end of October. I climbed back in the boat and lifted the anchor up, to get on our way, we made our way back up the coast to see some more sights. I had a look at the tank at this point because we had been driving around for a while now, not even half a tank had gone, great plenty left for some high-speed fun. We went full throttle again all the way up to the Rothschild estate, this is located just past Kerasia, it has two castle shaped towers which are visible from the boat and is the location where the royals stay on their own holidays. 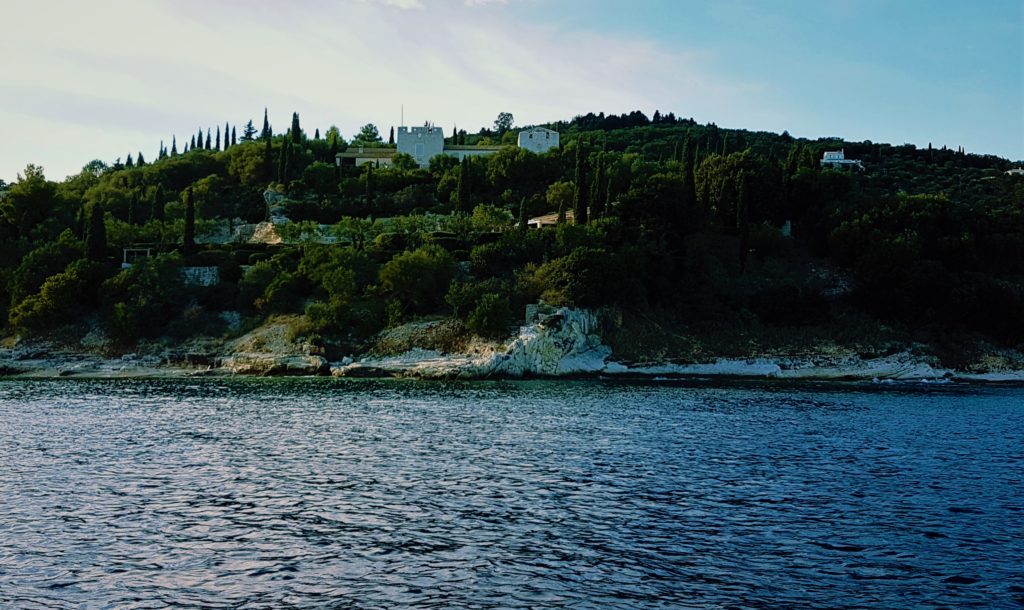 We continued along the coast further than we had been earlier in the day, the wind wasn’t as bad now, however we were told the furthest we could go was just past the sand bar, due to the strong winds at the top of the island. This is something to watch out for when you travel towards the north of the island. There is a large buoy and lighthouse marking the two ends of the sand bar and if you go through the middle of the two you will ground the boat so it is advised to go closer into the coast or if the weather isn’t too bad go around the outside. Seeing this and considering it was getting towards 6pm we decided this would be an adventure for next time. 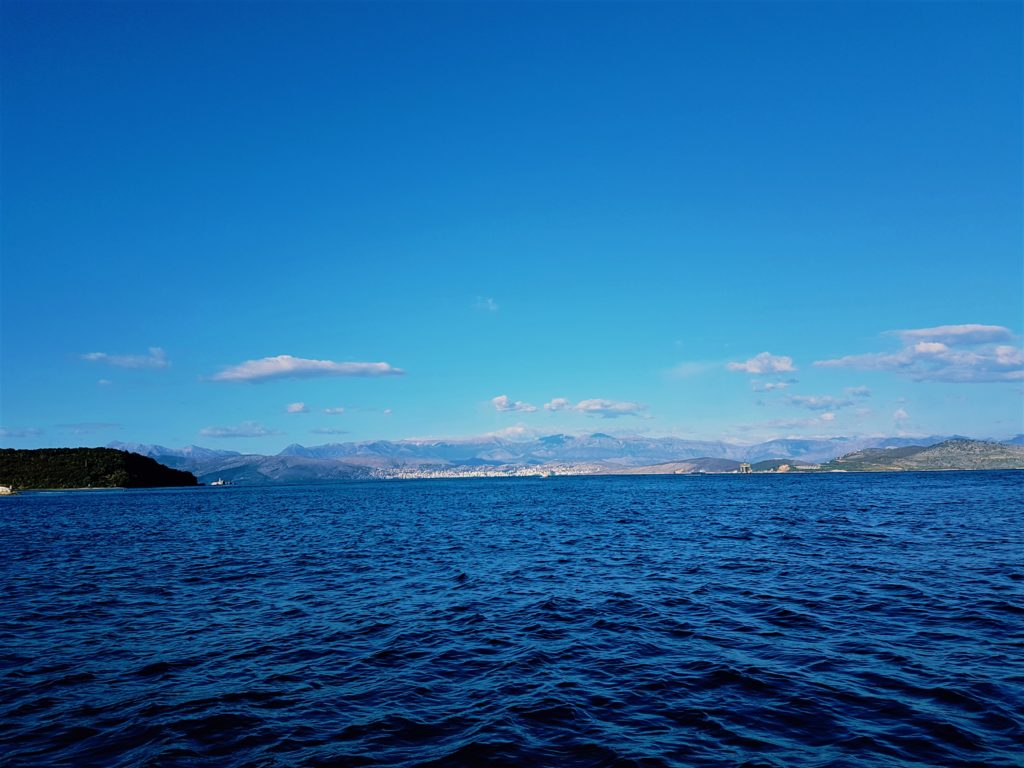 We headed on down the coast back to where we had rented the boat and turning into the very small cove and beach area next to Agni we decided to anchor down one last time. I saw some rocks near the coast that I wanted to explore. I jumped in the water and swam over the array of sea life near these rocks was amazing, all kinds of fish and I even ran into an octopus, well not physically ran into it. I was diving down to the sea bed and a tentacle came out of nowhere, looking around I saw him glaring at me from under a rock with his big bulging eyes. It was a strange area as there was a lot of large square shaped rocks under the water as if they had fallen in from the cliff, however they were definitely man made. After a while snorkelling I came up to the surface to get back in the boat, I look around…. nothing, except a boat floating in the next bay. Tasha had been reading her book and the anchor had come loose and she floated into the next bay, luckily, she saw me so I didn’t have to spend too long waiting. 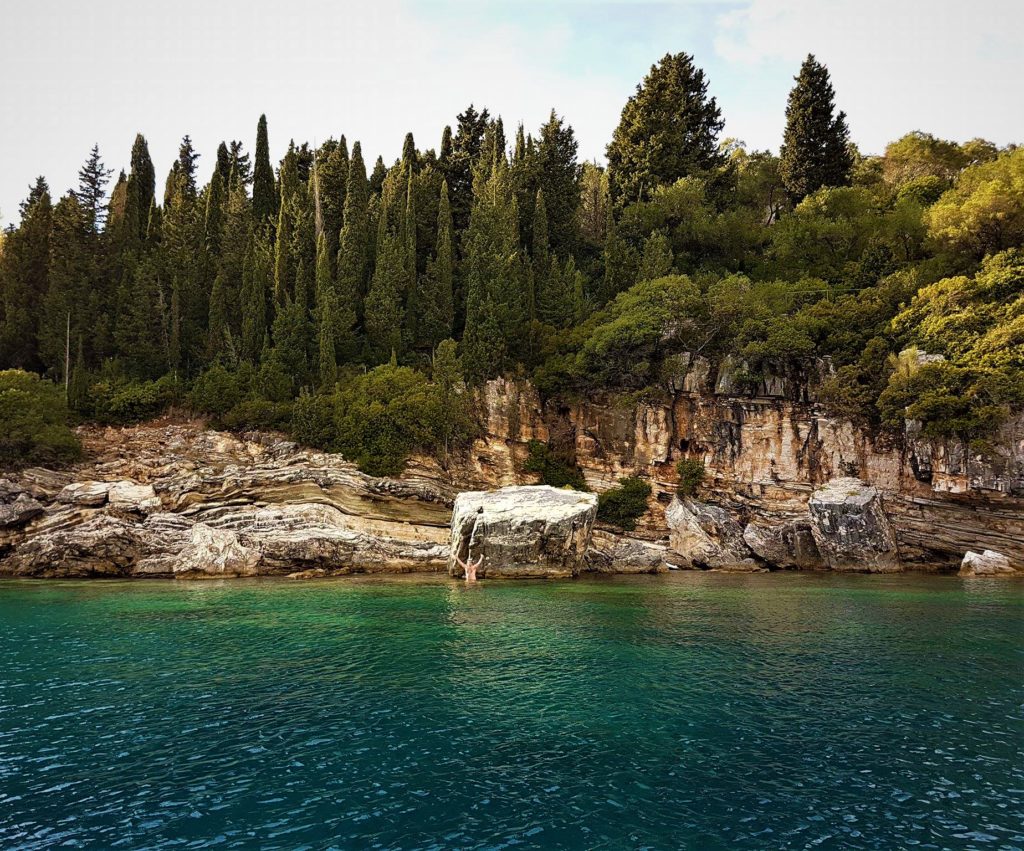 It soon came time to return the boat to Agni we docked at the jetty and one of the guys helped us in. The total cost was 105 euros which I thought was reasonable for the amount of time we were driving the boat. We were driven back to our hotel which was great as we were very tired at this point. Overall the day was brilliant and it’s given me a good understanding of hiring a speedboat in Corfu so next time the opportunity arises we will certainly be doing it again.