It was a sunny Saturday afternoon and I had just driven from Devon to visit Bournemouth University. As I didn’t want to waste the journey I thought it would be a great idea to explore some of the Jurassic Coast. Being from Devon you can imagine I’ve seen plenty of coastlines, but there’s something special about visiting somewhere different. I had heard of Durdle Door from friends and general internet gossip, so I was well informed of what it was and it seemed to be a popular location on the sightseeing map. I checked the best way for me to experience not just Durdle Door but some of the coastline also, I always try not to just go somewhere for the showstopper, I like to enjoy everything about the area. Looking at the map I noticed the Lulworth Cove to Durdle Door walk, this seemed a good choice. With the limited time I had it didn’t appear too challenging, so without pause, I headed to Lulworth Cove to begin my walk to Durdle Door. Read about some of the best walks in South Devon here “10 Amazing South Devon Walks”

Arriving at Lulworth Cove I found Lulworth Cove car park jam-packed with cars even a couple of coaches were there, OK so it was a Saturday but what had I got myself into. I parked up in the largest space I could find and got into some shorts, it was hot weather. The price for Lulworth Cove car park was £4 for 2 hours or £5 for 3, expensive but seemed quite standard for a tourist destination. I locked the car and turned around to stare up at the rather large hill I was about to climb, it was a good job I had plenty of water, which is something you should take as it’s not an easy climb. 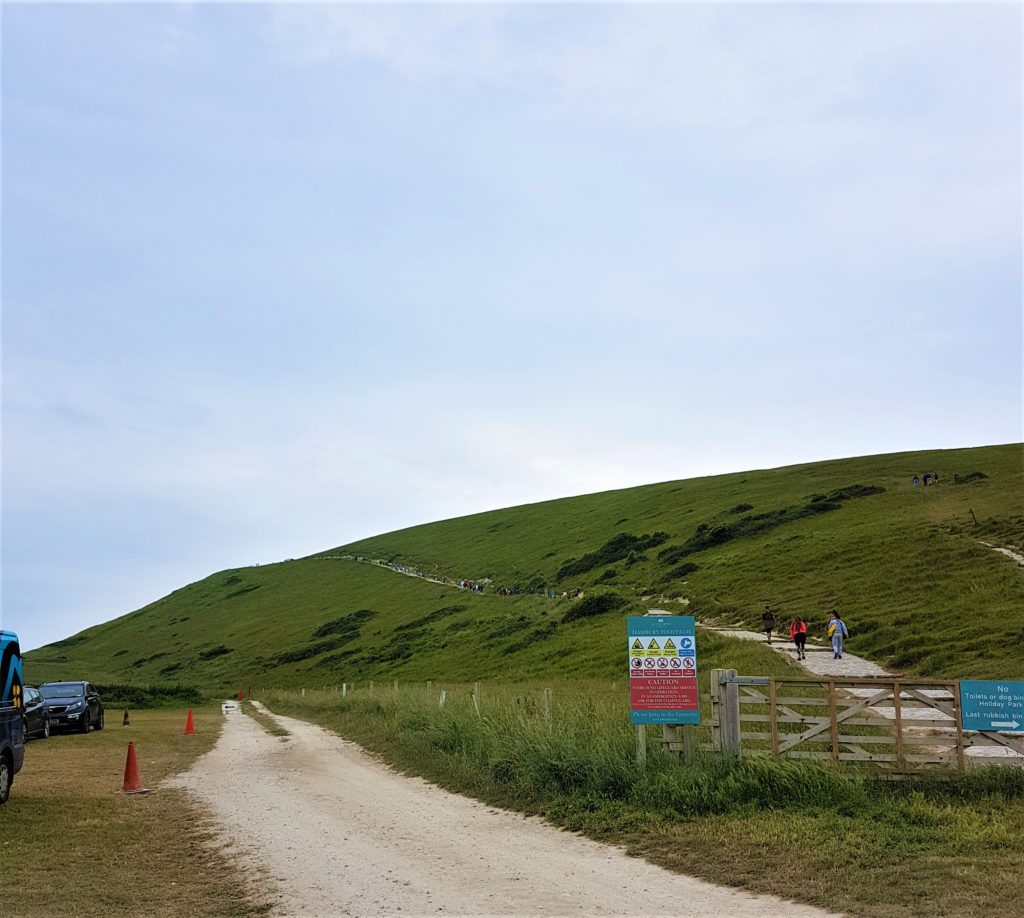 The long steep path leading up onto the cliffs was a bright cream colour, quite a natural trait for the area. I followed a stream of people walking upwards, lots of which stopped at various points to catch some breath. With very achy legs I made it to the top of the hill and what a wonderful view of Lulworth Cove I had, the sun glistened on the water and it truly looked like a holiday destination. 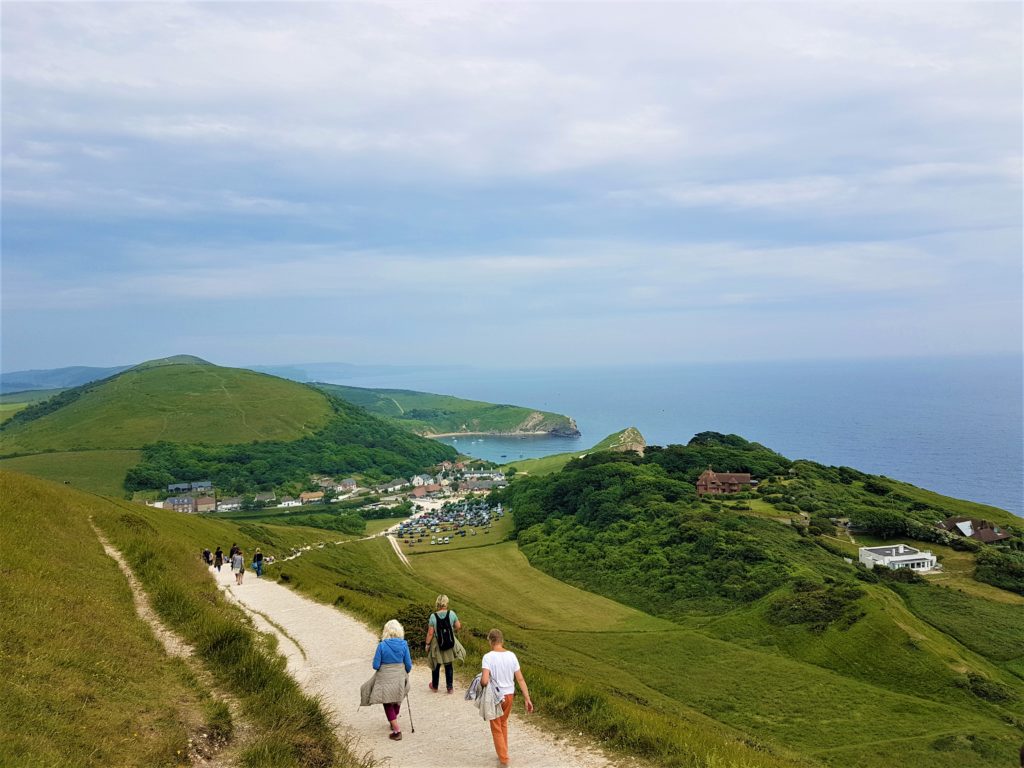 Determined to make the most of my £4 car parking fee I continued on and happily accepted the flatter ground at the top. At this point, I could see a shining white glow as the sun beamed onto the bright white cliffs. It became apparent that this was another location in which you could park your car, that’s if you didn’t want to the Lulworth Cove to Durdle Door walk. There were plenty of cars in Durdle Door car park and hundreds of tourists, one of the main campsites, Durdle Door Holiday Park is situated just up from Durdle Door so I assume lots of people were staying there. 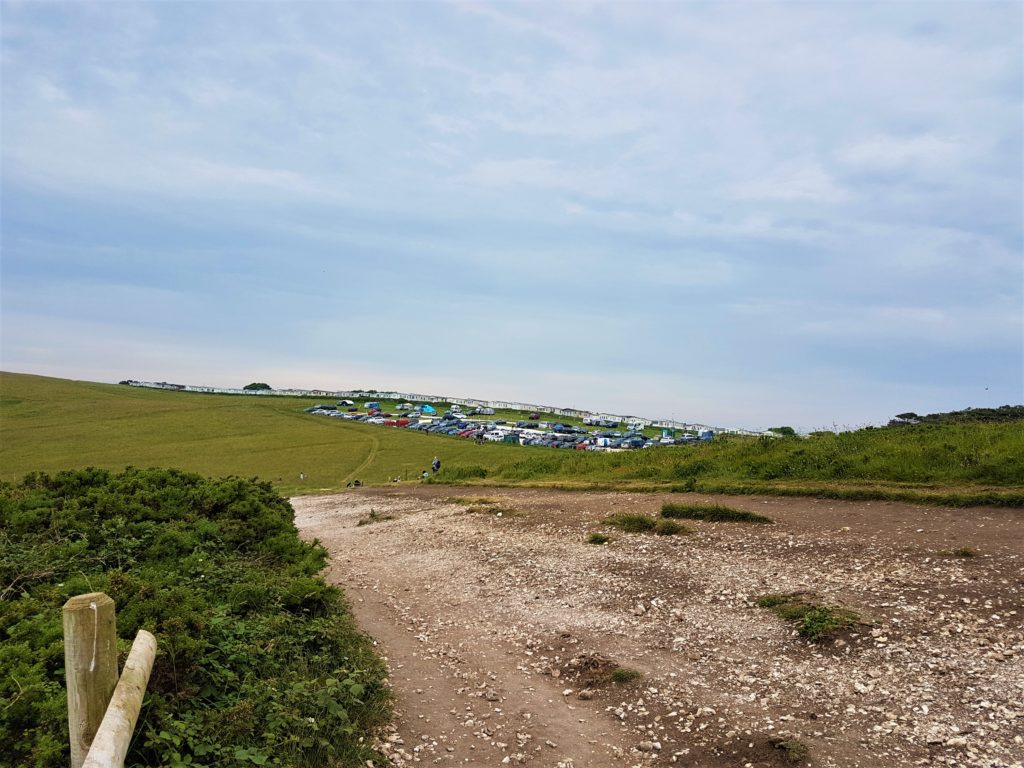 The flat walk along the cliff came to a gate at the end of the path leading onto a rather steep hill. Everyone was doing the standard shuffle down a steep hill walk…you know the one. I came to the end of the hill and could see Durdle door in all its glory. For something so normal it has a strange appeal to it, I suppose when you realise that it gives an insight into history you begin to understand why it’s so popular. I stayed around Durdle Door for a short while, laying down on the grass near the cliff edge, the majority of tourists were crowded around the designated viewing area so it was nice to get some space. 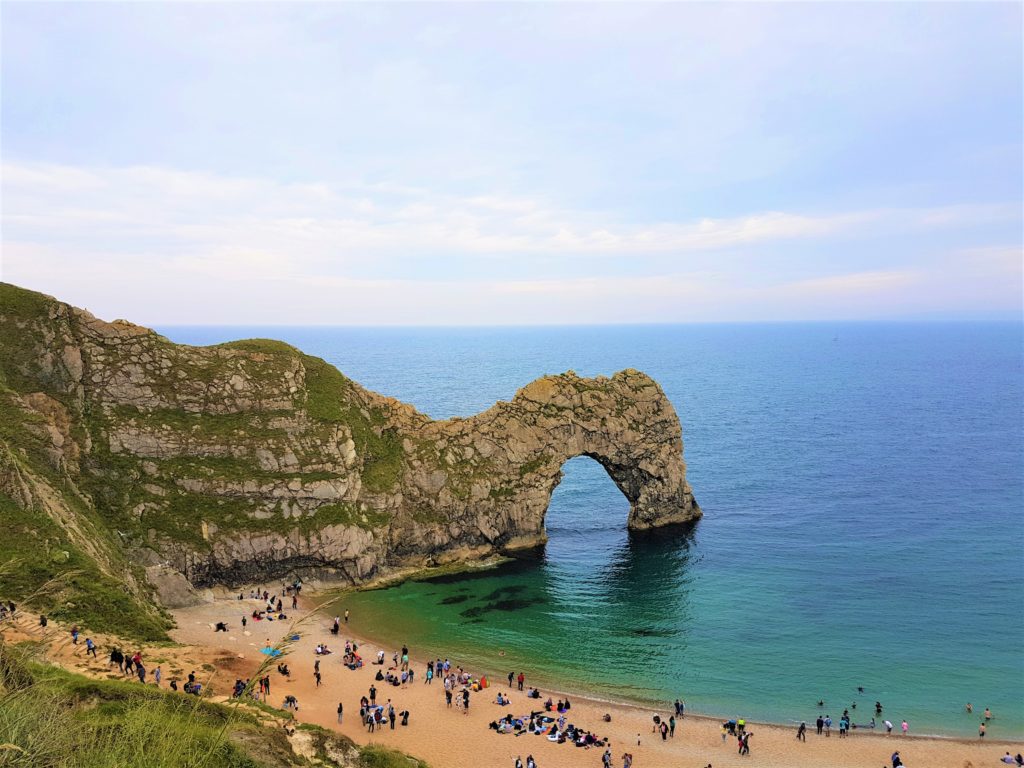 After a few pictures and a short session of “people watching”, I decided to carry on a bit further, it only took around 20 minutes to walk from Lulworth Cove to Durdle Door, this obviously depends on how fast you walk. I could see the next part of the walk was going to be tough and if your not a keen walker or tire easily I suggest you take this one slowly, it’s even steeper than the first hill from Lulworth Cove. 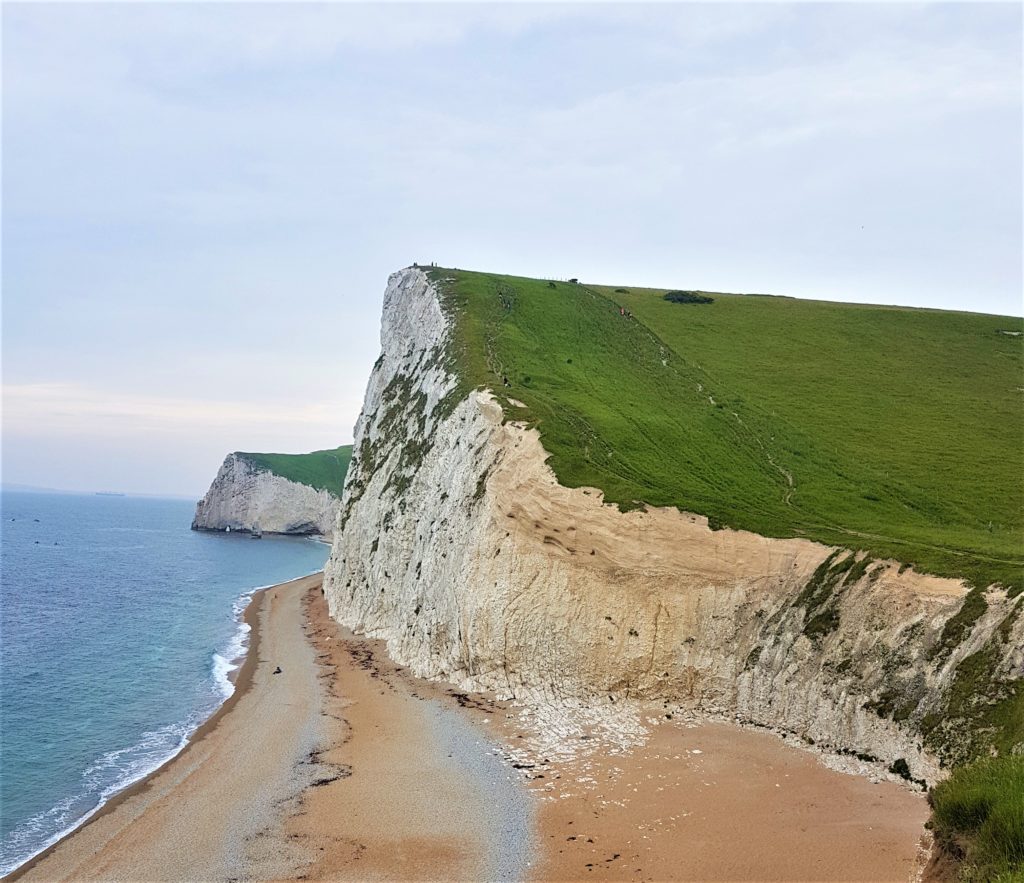 I started to climb up the hill and noticed that over the years people had created step shapes in the ground, not something I like to see, but considering I was tiring quickly I decided to use them. A few walkers had given up on their way, not all was lost though they had a fantastic view of Durdle Door. 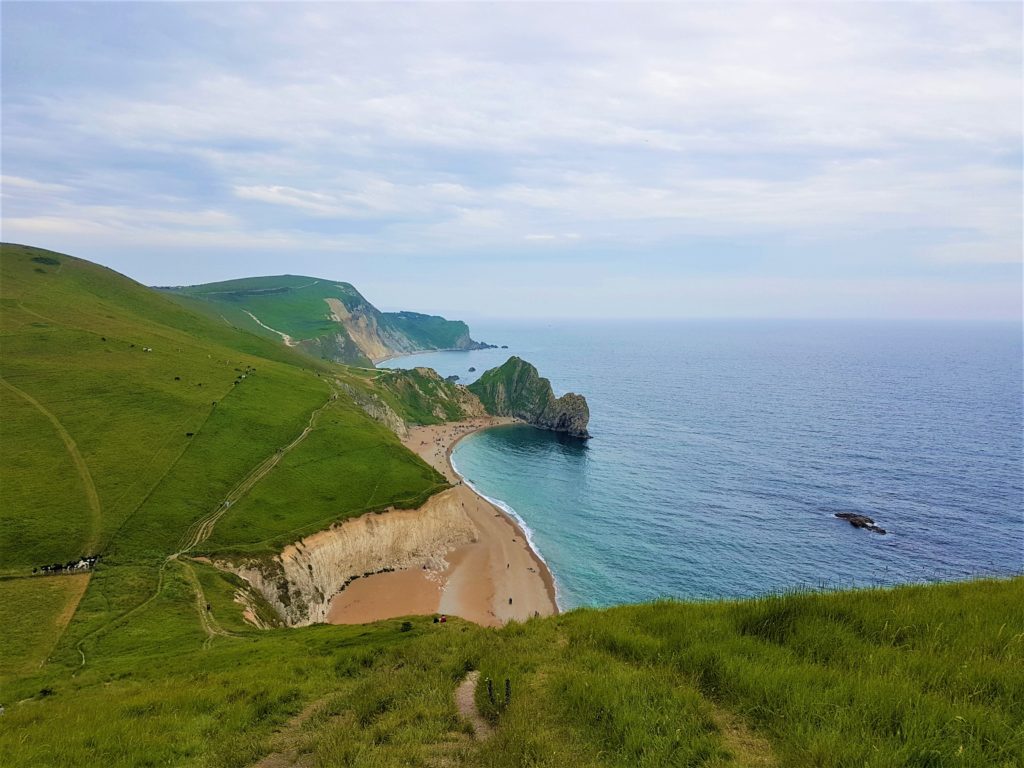 I got to the top and walked past the people who had also made it to the top, they had chosen their spaces to sit and relax. I walked through the gate at the end and an absolutely glorious view of the Jurassic Coast came into view, the white cliffs were beaming and I could see the stony beach below, I decided to settle here and relax. This area was really quiet, hardly anyone at all, so if you’re able to make it up the hill I would recommend it as it’s a great place to relax or have a picnic, without too many people. 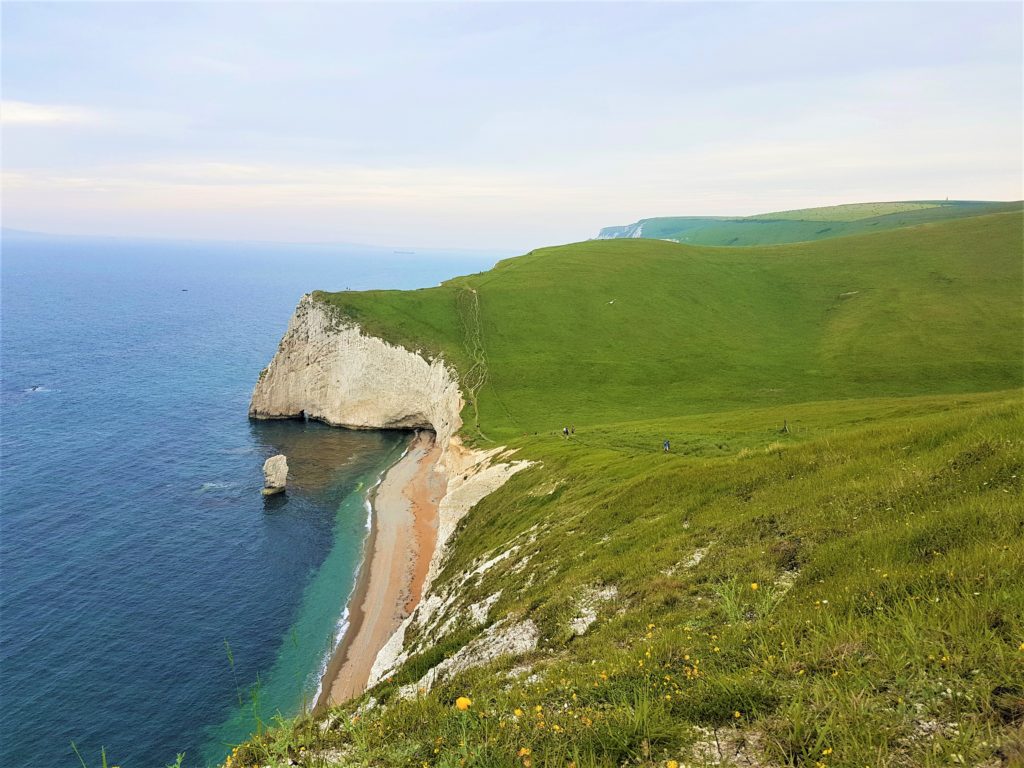 After a long rest, I made my way back along the coast, hoping to get back with enough time to explore Lulworth Cove. By the time I got back most of the cars had disappeared and the streets became quieter, a much better representation of this beautiful area of the country.

I walked down through the main street, which is pedestrianised and made my way towards the Cove. The beaches aren’t like the ones back home in Devon, these beaches are mainly pebbles and usually towered over by big cliffs, an absolutely beautiful sight and a delight to explore. The cove itself is an amazing creation and despite being classed as a cove it is almost completely circular. 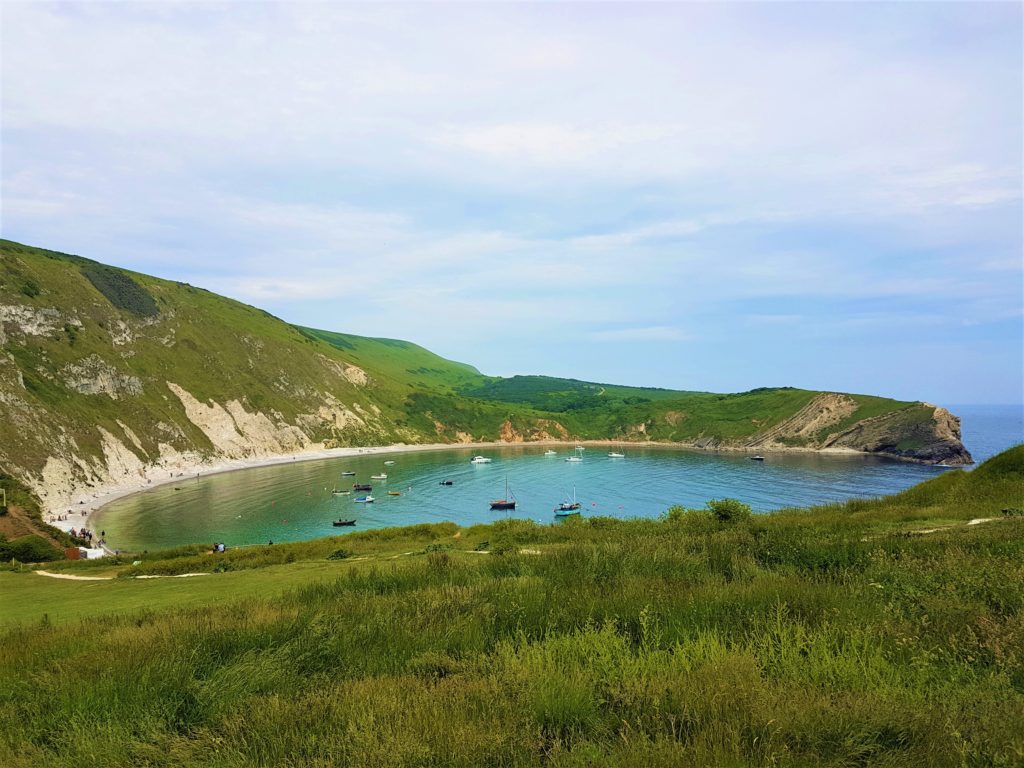 There were some small paths leading away from the cove, up onto the cliffs, I decided to investigate. The paths appeared to lead to some rather spectacular viewing points and I even stumbled upon another interesting rock formation. Stair hole is made from 3 different types of rock and has created another beautiful arch with a small cave and holes, it’s not the postcard shot everyone comes here for but is equally as beautiful as Durdle Door. 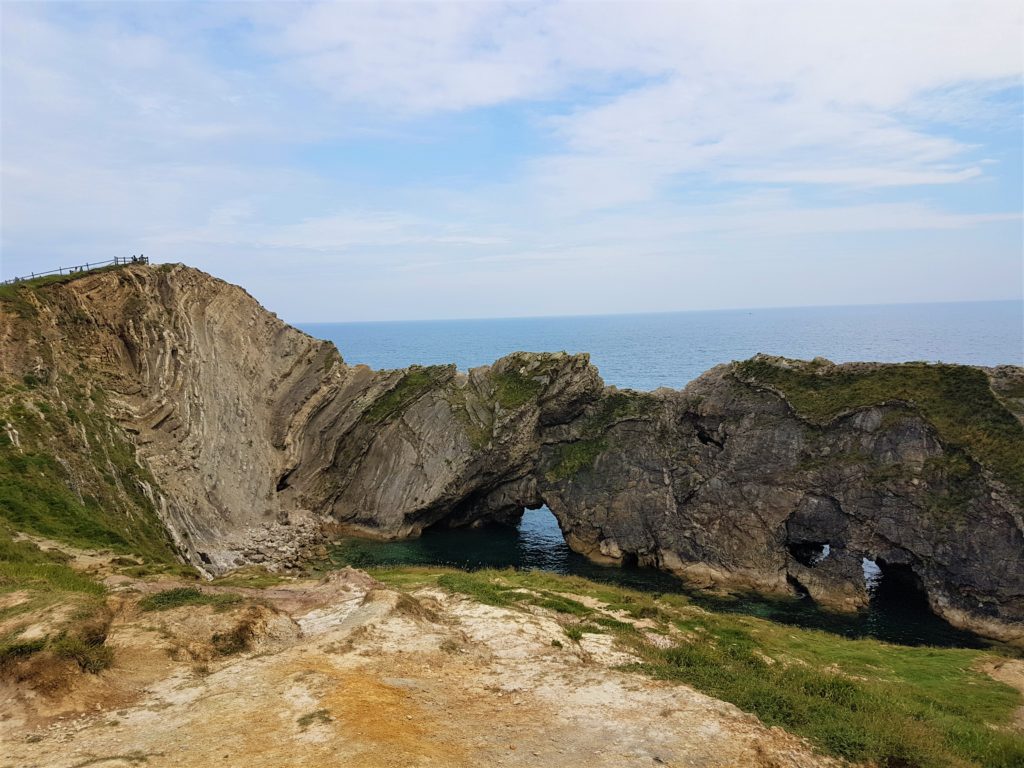 My time was almost up and I had been all the way along the coastal path to Durdle Door, past Durdle door and back again to Lulworth Cove. I explored Lulworth Cove and had seen some great rock formations, all this in 2 hours. I didn’t rush the day but I think for sightseeing, 2 hours was plenty. Next time I visit I intend to stay longer and have something to eat, as well as relaxing in front of some stunning scenery.

Let me know about your visit to Durdle Door and Lulworth Cove, what did you think and any suggestions for when I visit next time.