We visited the beautiful island of Corfu Greece in early October planning to escape the changing seasons of the UK, lets face it we weren’t ready for the summer to end. The main reason for the trip was to relax but there were still some places we had to visit and Corfu Town was one of them.

Corfu Town or Kerkyra as it is known in Greek is a UNESCO world heritage site and its easy to see why, steeped in history having been occupied by the Venetians to defend against the Ottoman Empire and many influences coming from when it was ruled by the British. You may find that a day is not long enough to see all that this historic town has to offer so maybe consider adding an extra visit on or staying in the town itself.

Our hotel which was located on the north east of the island, provided a free shuttle bus to Corfu Town which was great although if you want to catch the local bus ask for a timetable from your hotel as they will know the best route or you can find some times and routes here. We arrived in Corfu Town near the port, as you come into the town you notice the huge cruise liners decorating the water.

If you only have one day to visit Corfu Town you will have to plan what sites to see first as you can end up walking a long way. The first site we planned to visit was the New Fortress which conveniently stood looking down on us from the bus stop, now to find the entrance. 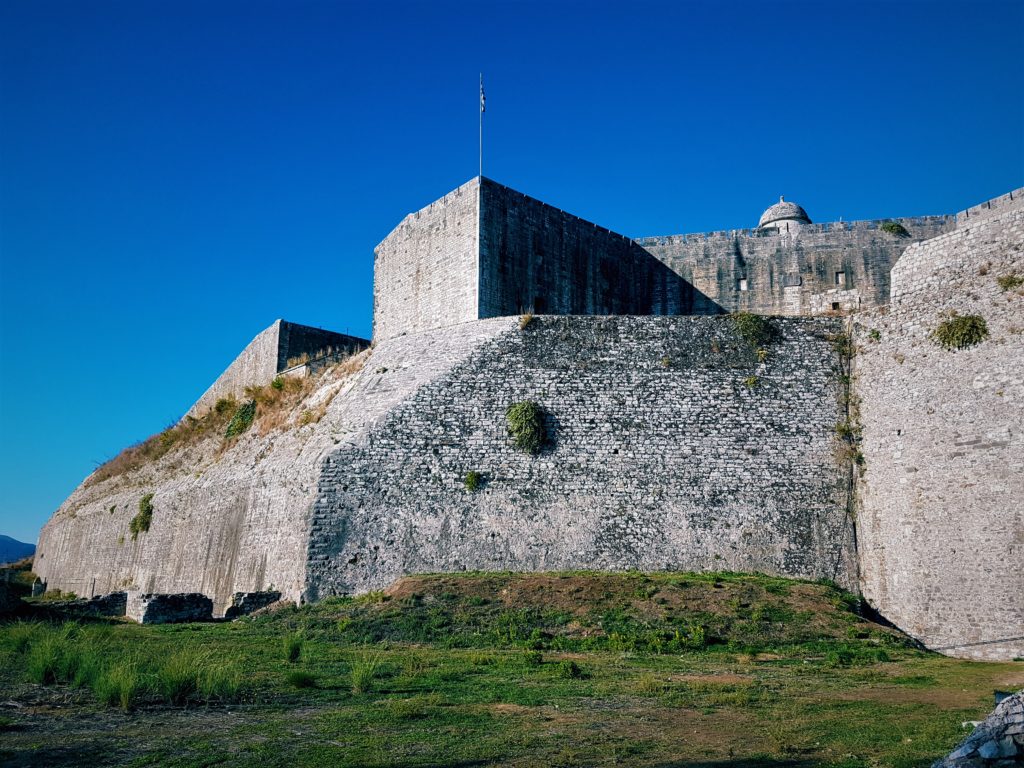 We decided to do what us Brits do best follow the crowd, someone had to know where the entrance was. We ended up looking for the entrance ourselves as everyone else from the bus walked away from the Fortress. Eventually we found a road leading up to what looked like the entrance. We started to get a feel of a town with charm as the streets turned to cobbled stone and vines hung from wooden trellis, we even found some wonderful street art. 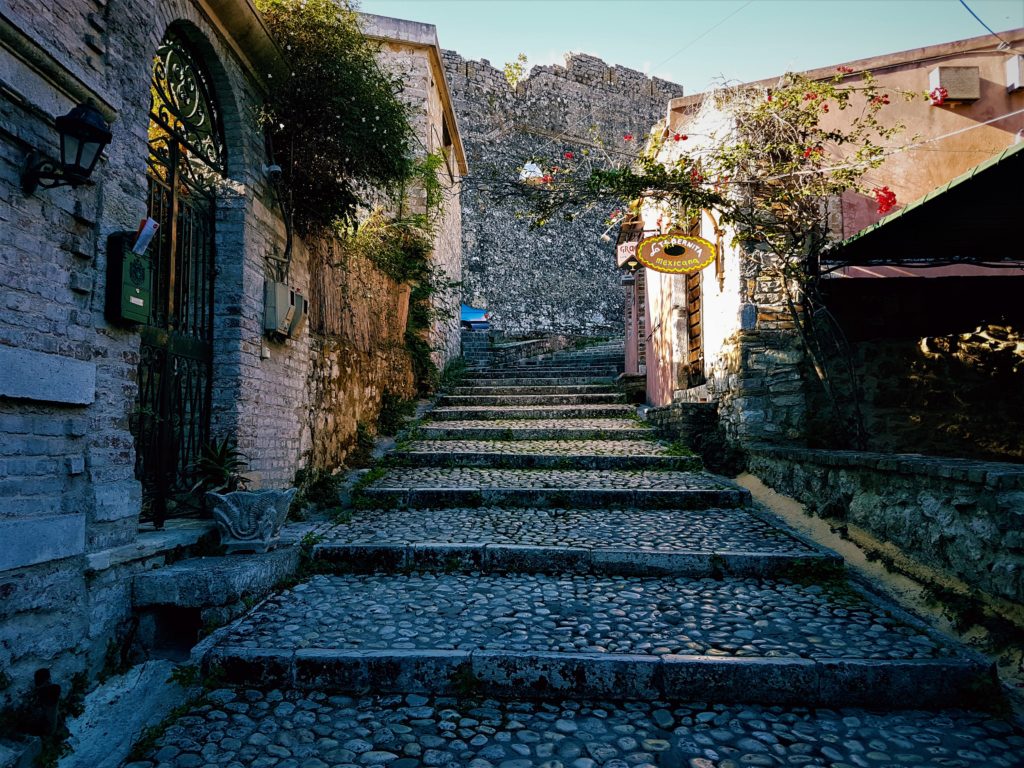 The New Fortress was a clear indication of Corfu Towns defensive history, with tunnels dug into the ground and buildings within the structure itself. Of course, we headed straight to the top, the view is what we wanted and it didn’t disappoint. The rooftops of buildings glistened in the sunlight and the sea sparkled like a blue gem, you could watch for hours the people going about their day, everything could be seen from up here. 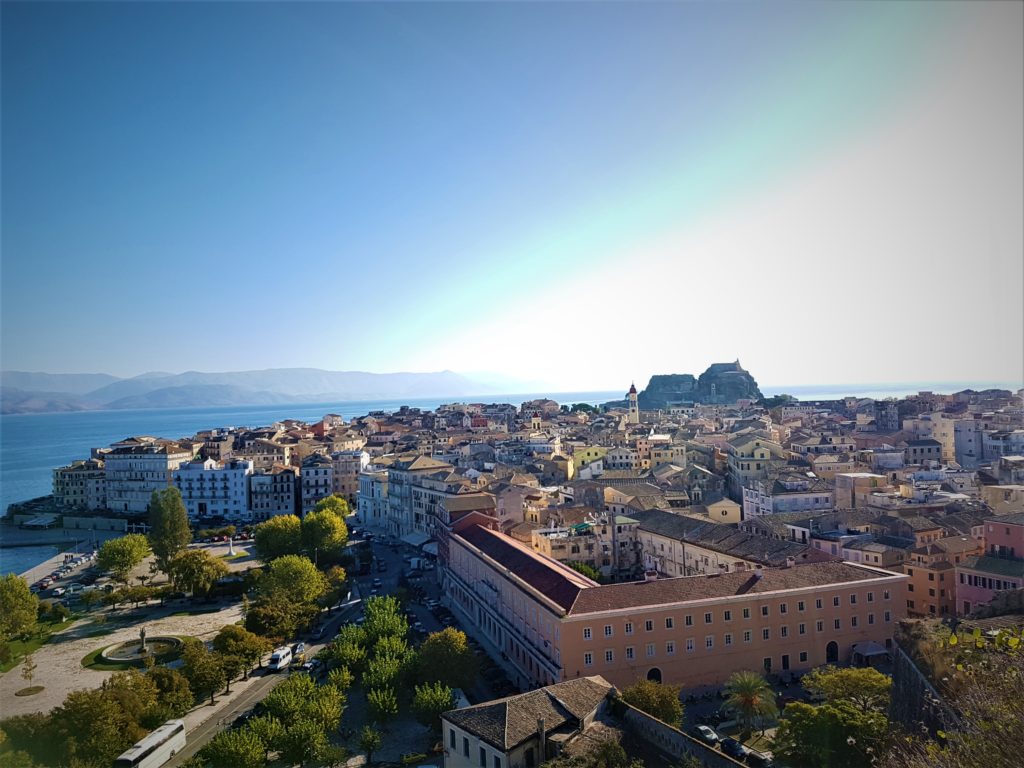 After enjoying the view for a few minutes more we headed down into the town taking turns down roads rammed with locals going about their day, island life was in full swing. There seems to be several other roads coming off one road so wherever you turned there was something new. We managed to find the main street and much to our amazement there was a Marks and Spencer’s along with a few other well-known brands. We had a look in some of the shops but we weren’t in the market to buy anything so didn’t spend much time looking, although if you want to have a bit of retail therapy Corfu Town has plenty to offer from authentic to branded. 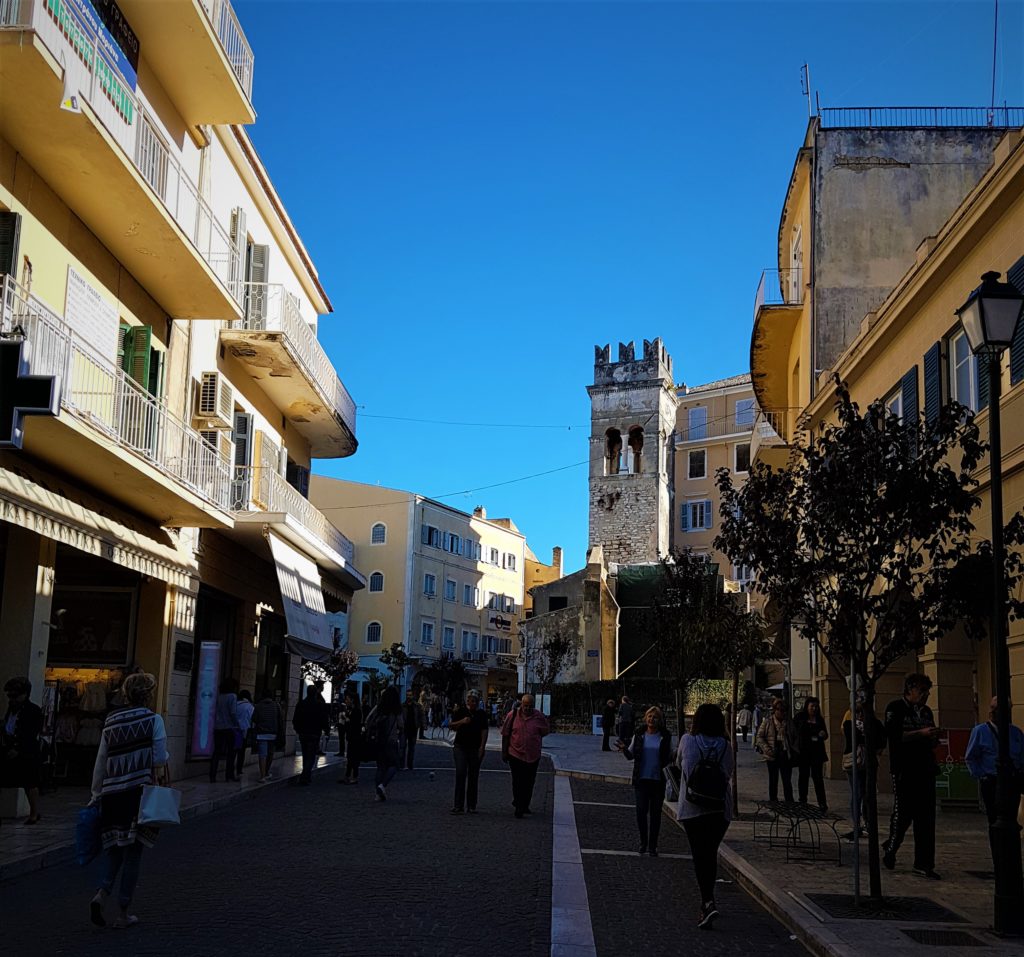 After exploring the retail areas of Corfu Town, we wanted to head on over to the Old Fortress and hoped to bump into the Royal Palace on the way. Just up from the port there is a road leading around a bend with some lovely little restaurants overlooking the sea. At the top of this road is a classic view of the Old Fortress which everyone seems to take a picture of so obviously we couldn’t resist. 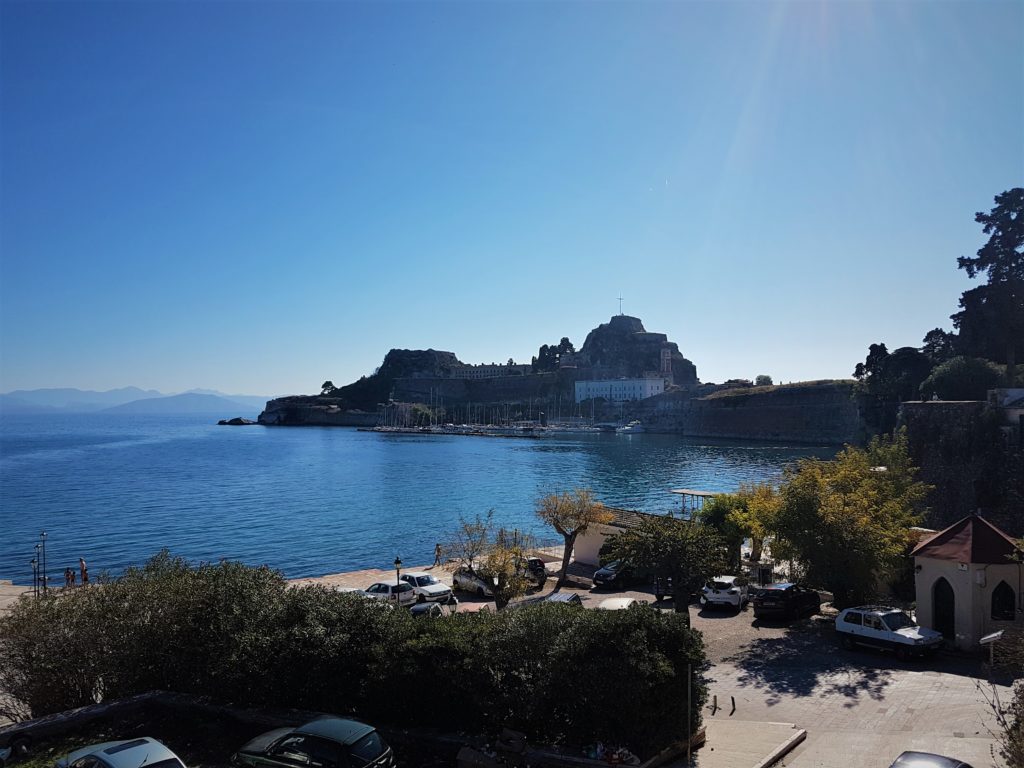 The Royal Palace is actually home to the museum of Asian art and stands gloriously overlooking Corfu Towns cricket pitch which was developed when the British empire occupied the island, another example of how diverse a culture this island is. We didn’t go inside the palace but explored the outside, we new we only had a day so we wanted to make the most of it. 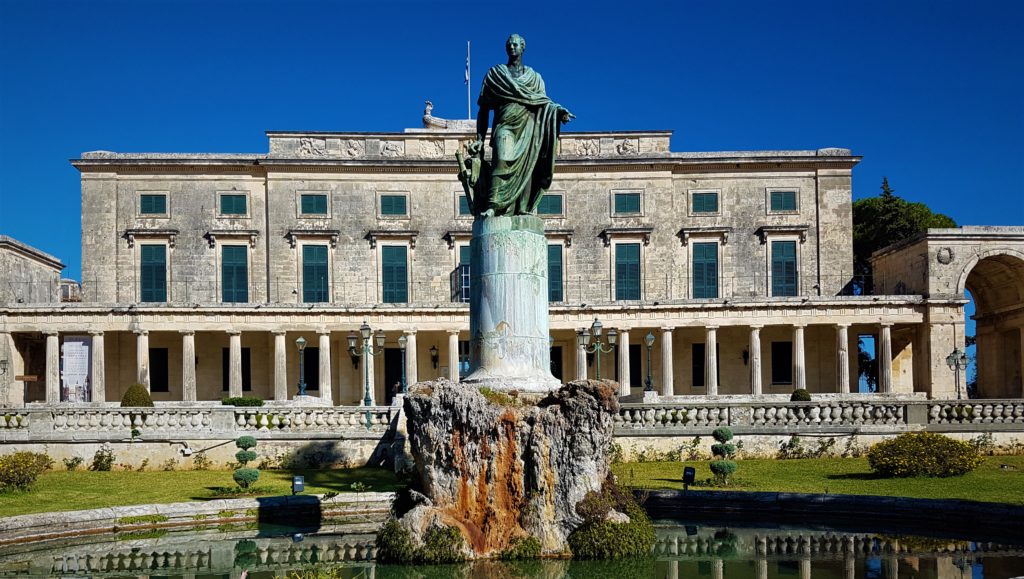 Passing the palace, we entered a much more modern area of the town, this area was pedestrianised and looked fairly new, the road being lined with restaurants and cafes including both a Starbucks and a McDonalds, another example of the mainstream mixing with an old-fashioned town. We made our way towards the Old Fortress strolling through the beautiful park, opposite here is a good place to park if your driving into the town. 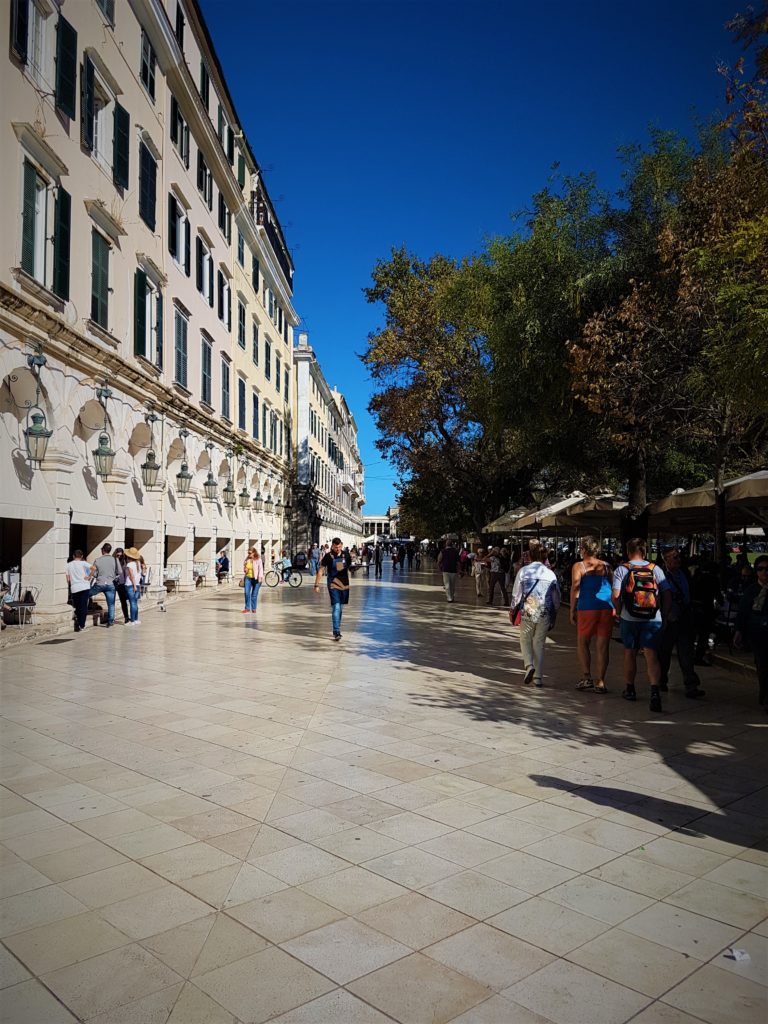 The Old Fortress is a much bigger site than the New Fortress and if you were to compare the two you would probably assume the Old Fortress was in fact the newer construction as its in much better shape than the New Fortress we saw earlier. This Fortress does cost to get in but its not much and is well worth it. As you enter the gates you cross a bridge where there seemed to be an awful lot of people taking photographs however I wouldn’t waste time here as there’s some amazing opportunities for photos inside. 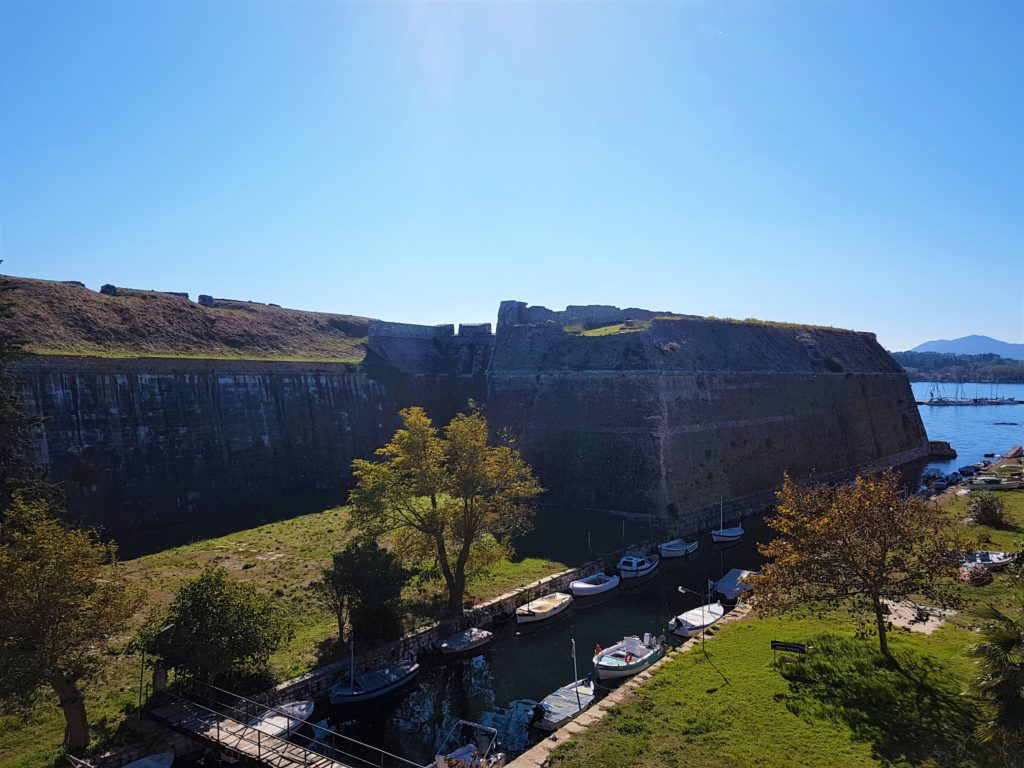 The first area we entered had two museums located either side these are great places to give you a feel for the history of Corfu Town and what this fortress has stood through. The exhibits on show in the museums are taken from inside the fortress itself including pieces that have been hidden away under more recent architecture, don’t forget this fortress was used by several empires…I bet there’s still stuff to be found.

After admiring the history, we made our way up to the most recognisable area where the church of St George stands, the church was built in 1840 to meet the needs of British soldiers when Corfu was under British occupation. The interesting and most recognisable feature is the fact it looks more like a Greek temple although the layout has been changed due to bombing during the second world war. The building and whole area is something you must see for yourself and the scale of it considering it is a military fortress is immense, there are some great views overlooking the sea and town. 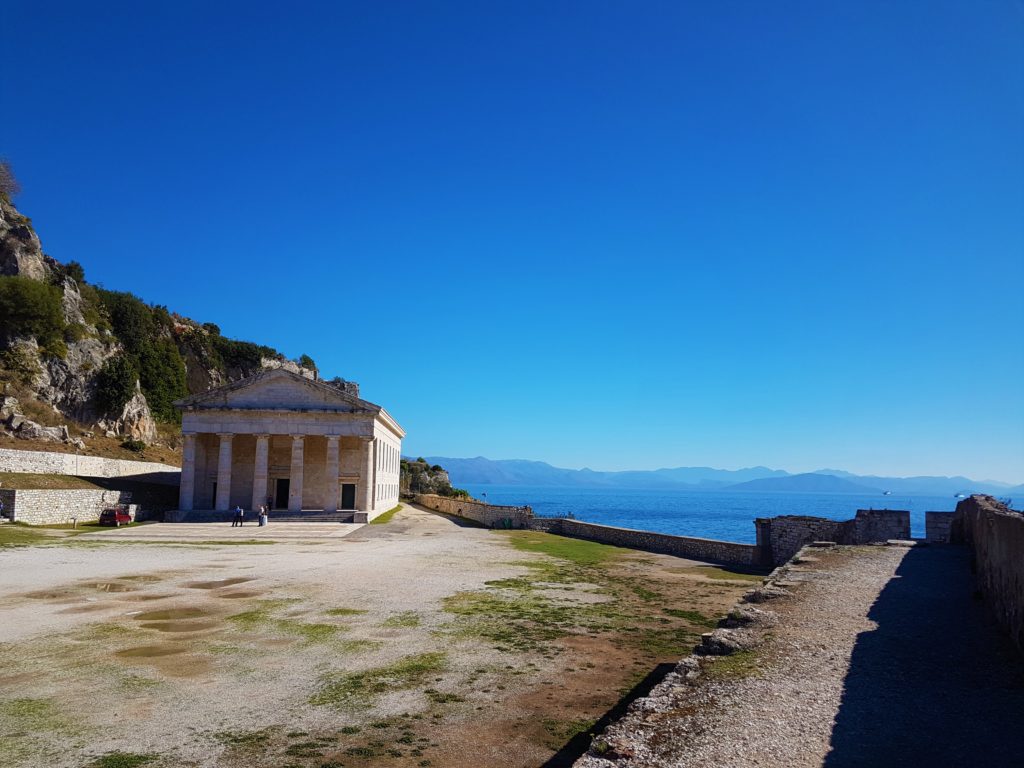 If views are something you love then this next area is a must, the climb is quite long with rather a lot of stairs so be prepared. The lighthouse is another recognisable image of Corfu Town and standing high above the fortress grounds it’s a great place for some photos. The lighthouse and its dwelling were built in 1822 by the British to guide ships into the harbour, you can tell this area must have been a great vantage point for the military. 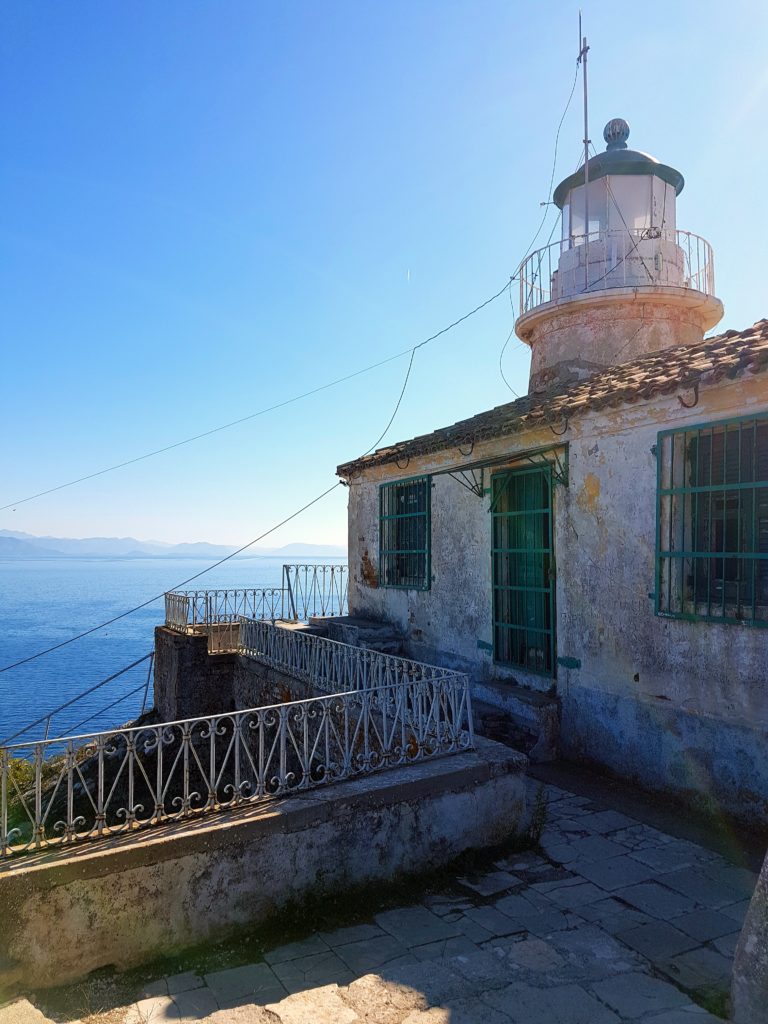 We made our way back down to the open square where the church of St George stands. We started wandering around as there are lots of nooks and crannies to go down. We found the old military kitchen with old style stone ovens, we also had a look at the jail cells and cannons which looked very weathered. We managed to find a small tunnel to go down which came out at the side of the fortress overlooking what I can imagine was some sort of training ground. There were lots or areas that weren’t accessible to the public, which shows that this fortress has so much more hidden away and I can imagine soldiers would live for months on end not setting foot outside the walls. 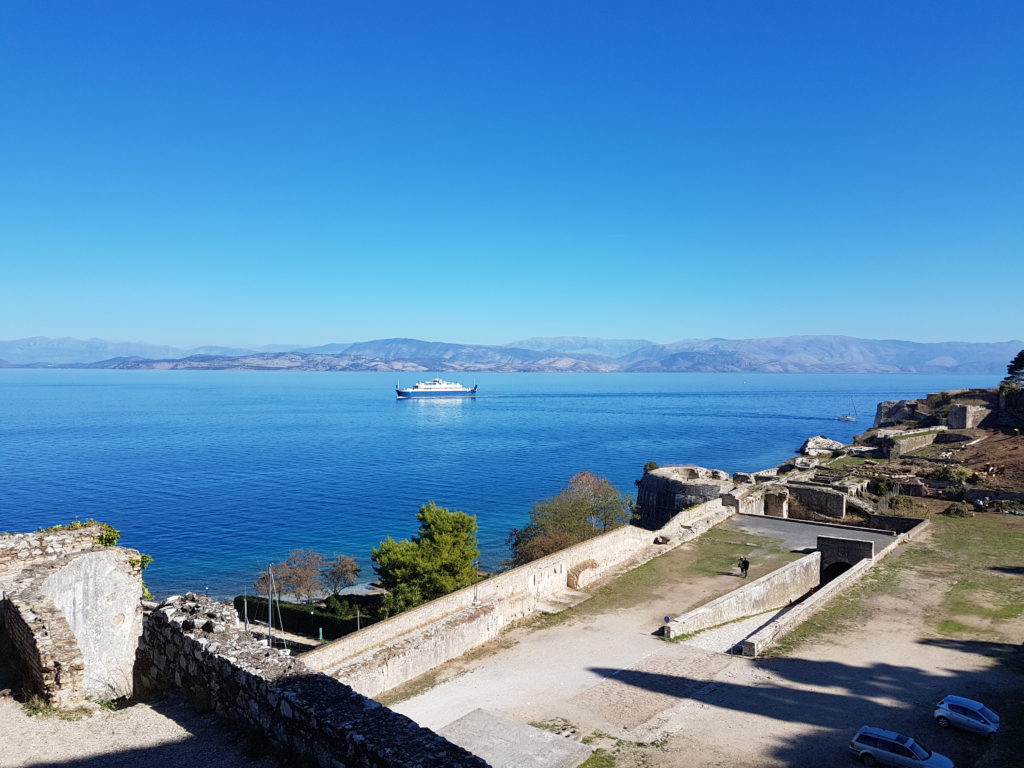 After roaming around for what must have been nearly 3 hours we decided to make our way back to the bus as it was leaving soon. We strolled through the streets gazing up at the high buildings which look like they have stood for hundreds of years. Corfu Town has significant influences from different ages and it’s easy to see that people who live here are accepting a modern world into there town but along with that they are keeping their character and charm which has built up over so many years. 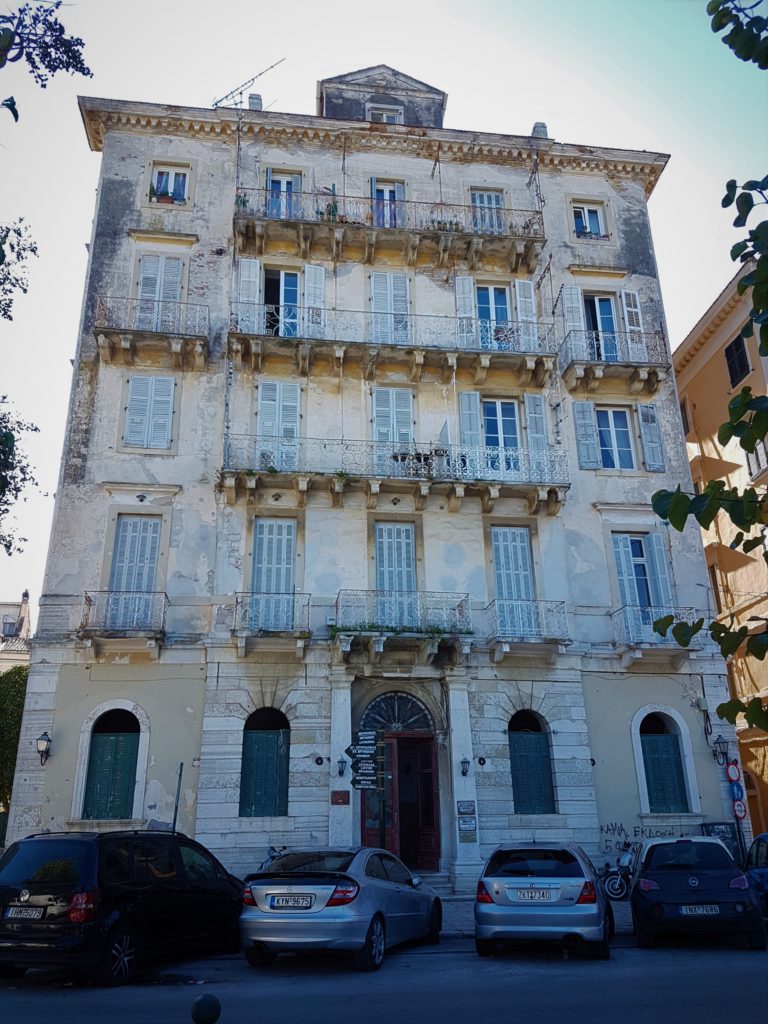 Corfu Town is somewhere you must visit to really get a feel about what is really at the heart of this island. It’s the perfect example that different cultures can take small influences from one another and create a really harmonious way of life.

If you enjoyed reading about our adventures in Corfu Town there’s a link below to the Thomson (TUI) website where you can find out about all there latest holiday deals and coupons including holidays to Corfu.

Let me know about your trip to Corfu Town and don’t forget to subscribe to the website or follow us on our various social media channels. Thanks!!

This article contains affiliate links. This means if you click on an advertisement or purchase something, then I receive a small commission, from that company. I only recommend products that I would use myself.